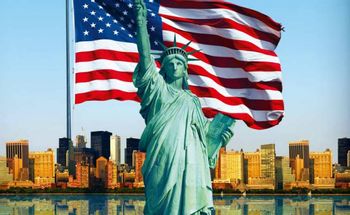 "We hold these truths to be self-evident, that all men are created equal, that they are endowed by their Creator with certain unalienable Rights, that among these are Life, Liberty and the pursuit of Happiness."
— The Declaration of Independence (July 4, 1776)
Advertisement:

Just like Eagleland, the American Dream comes in two flavors:

This came from the perception that 19th- and 20th-century immigrants from the Austro-Hungarian, Russian, and Italian Empires had of the USA. The first two nations weren't fond of democracy, socialism, or free speech, but Austria-Hungary wasn't fond of ethnic-nationalist sentiments (because it was such a threat to her multi-ethnic society) and Russia didn't like religious dissent (because it was also a threat to her multi-ethnic society, which was held together by the Orthodox religion and loyalty to the Tsar). Lastly, Southern Italy was run by brutal crime rings. So much like Australia, Canada, and New Zealand the USA was also a place where people would be free and could hopefully earn a better life for themselves and their kids. So many people aspired to this, in fact, that the USA's ethnic makeup became 'German+Other' where before it had largely been 'Celtic+German-ic'. note Although the two largest ethnic groups in the United States today are still, respectively, the German- and Irish-Americans.

The "American Dream" is the hope that people can earn a better life for themselves in The Americas, or after the huge surge in European emigration in the late 19th century the USA in particular. Prior to the 19th century, when the banking and financial sectors as we know them today really took off, the ownership of land separated the 'haves' from the 'have-nots' and so in those days the dream was more specifically about owning farmland (whether or not you tilled it yourself, which we'll get into later). This changed as the supply of 'free' land dried up (once the Amerindians had been ethnically cleansed from it in North America and every ethnic-Amerindian Subject in Central-South America already had a lord) in the mid-late 19th century and the value of agricultural products declined relative to services (e.g. shops), non-organic resource extraction (e.g. mines), and manufacturing (e.g. clothes-making factories).

That said, the Dream outside the eastern coast of Northern America was rather different. The European colonies on the northern continent were populated almost exclusively by Europeans (and particularly European women, who were largely absent elsewhere due to inter-marriage with the richest and/or prettiest locals) who aspired to owning and cultivating crops on their own land and so becoming rich and powerful (or at least self-sufficient) in that way. But in Castilian America (everything south of modern-day 'Florida' and other southern states of the USA) ethnically-cleansing the land of its inhabitants was both impolite and undesirable. This is because the people there were at least nominally Christian and second- or third-class subjects/citizens of the crown, which made killing them look very bad on both counts. You could also set yourself up as their feudal lord, which meant you'd have a nice title and be entitled to a cut of their produce - so you could be rich and didn't have to work for it as hard.

In a single word, the American Dream was Prosperity. But not everyone could be rich; in the north-east prosperity was second to survival and mere independence, and through the rest of the Americas even impoverished landlords could console themselves with prestige and control. But unlikely as it was to work out, many believed that Diligence, Hard Work, Willpower, and a bit of Luck could make any man rich and respected in The Americas. See By Your Own Bootstraps and Hard Work Fallacy.

As the Industrial Revolution changed the importance of ownership of farm land, the American Dream morphed to include elements such as owning your own small business, or your own home with a bit of lawn. All elements of economic independence in the modern age. This independence meant that obtainers of the American Dream could see their children free to become whatever they wanted to.

Immediately after World War II, the American Dream was the standard idea of a husband, who went to work in a major city, usually by driving to the train station (or being driven by his wife) and commuting; a ranch-style house in the suburbs; two cars and a stay-at-home wife and mom who raised their average brood of 2.5 children. (See also Nuclear Family).

In modern day America, this tends to mean any number of things, including having a stable job, owning a paid-for house and car(s), and raising a family. Ronald Reagan in one of his early Presidential campaign speeches defined the American dream as simply being able to own your own home.

In fiction the American Dream tends to be depicted as either getting really, really rich or else living a happy suburban life like 1950s sitcom characters. The results are commonly either a Rags to Riches story, or Happily Married.

This view tends to argue that the American Dream is either not real, being really just a dream, or flawed (or dead). Often complaining that the illusion of some future prosperity is used to keep the "masses" happy while they are oppressed in the present. Those who have read The Great Gatsby will know what this view is like.

In this setting the average citizens are shown to all be busy working on their own Get-Rich-Quick Scheme, which they are convinced will one day, maybe even tomorrow, make them very rich, and they are, if not uninterested, then outright opposed to the conditions of the losers in life - in other words, survivorship bias. If fortune waits just around the corner, why worry about such things? After all, losers are losers for a reason. These more cynical takes may also feature the observation that the road to success is a lot more difficult to travel than the Get Rich Quick Schemers anticipate, and that their own search for an easy route to success is holding them back and preventing them from accomplishing anything meaningful; in essence, they themselves become the losers they dismiss. Death of a Salesman deconstructed the dream this way: pursuing greatness and riches actually prevents/impedes a less grand but ultimately more attainable level of success.

More recent interpretations reflect on the isolation of Suburbia or the high amount of personal and national debt Americans have accrued over the last thirty years. Families in these works appear to have the perfect life, but it's all a sham. To maintain the facade, the characters may have given up their ideals to lick their soulless boss' boots, or have a secret second life selling drugs, or marry someone they don't love just for their money, or kill somebody (including themselves) for the life insurance. In this version, you can have the American Dream™, but it comes at a great price, literally and figuratively.

Cynical takes on the American Dream also tend to treat it more as a fantasy, or even a delusion, than a realistic dream. Instead of a land of unlimited possibilities and opportunity, America is a land of limited resources and people all competing for them; this means that there's only going to be so much of the pie available to share, and not everyone is going to get an equal slice. Thus, there's at least one loser (if not more) for every winner; someone's got to clean the streets and scrub the toilets after all.

Again in fiction the American Dream tends to be depicted as either to getting really, really rich or else living a happy suburban life like 1950s sitcom characters. But this time if you go for the former you'll discover that it's Lonely at the Top and if you go for the latter you'll find yourself condemned to an Awful Wedded Life. Take your pick.

Seriously, what the American Dream entails is constantly up for debate, but it's usually agreed that it involves all citizens being allowed to achieve what they want, or at least the opportunity to try. Often it is pointed out that different minorities have commonly been handicapped in chasing the American Dream compared to other Americans. The term American Dream is often used in the context of immigrants coming over to the "Land of Opportunity" (think of the song "America" from West Side Story).

May have some relation to the Ankh-Morporkian Dream, reportedly that of "making boatloads of cash in a place where your death was not likely to be a matter of public policy".

Not to be confused with Professional Wrestling's "The American Dream" Dusty Rhodes, with the Distaff Counterpart/successor/possible daughter of Captain America, Shannon Carter or with the erstwhile TV show American Dreams.