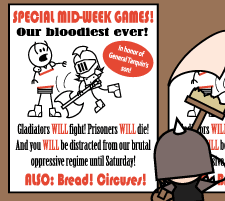 They aren't usually this honest about it...
"Already long ago, from when we sold our vote to no man, the People have abdicated our duties; for the People who once upon a time handed out military command, high civil office, legions — everything, now restrains itself and anxiously hopes for just two things: bread and circuses."
— Juvenal, Satire 10.77–81
Advertisement:

Evil governments are allowed to be evil because they appeal to the needs and desires of the general populace.

The workers all get paid, everyone has enough to eat, and the trains run on time. And it's not a Lotus-Eater Machine or an especially efficient Propaganda Machine; the stuff is real. As a consequence, as long as the people are contented, who's going to care about petty things like restrictions of basic freedom, environmental destruction, WMD research, or random abductions...

The trope name (Latin: Panem et Circenses) comes from Roman poet Juvenal's metaphor for people voluntarily (or democratically) giving up civic responsibility for a reasonably stable status quo (the 'circus' in question being an arena for spectator sports like races and Gladiator Games). When the people are well-fed and having fun, they will be too contented or lazy to protest against those in charge (they may even start to thank, adore, and praise those in charge), turning them into Gullible Lemmings and Apathetic Citizens who will leave the Powers That Be free to do as they please. These societies tend to be run by Totalitarian Utilitarians and/or Corrupt Corporate Executives, but bread and circuses can exist in whatever form of government, even in democracies and "utopias."

It's not like the leaders are running a Lotus-Eater Machine or simply covering up the destitute, either. For examples to qualify, both the food and the fun have to be real. Where they come from or what they cover up will be the thing The Hero sets out to expose.

This situation also sets up conflict for a hero who sees the evil of those in power, because as far as the neighbors are concerned, the hero is simply a rebel or a troublemaker out to ruin their (relatively) happy life — or worse, submerge them in fire and brimstone. Too much focus on the contentment of the people may also lessen audience sympathy for the hero; sometimes, this is even the correct thing, because the hero really will cause more trouble than he fixes.

There are three primary reasons for this conflict:

If The Hero is forming La Résistance or fighting in it, he regards the first as manipulation, and the second and third as simply wrong. If, on the other hand, he is not trying to bring down the government and this issue comes up, often enough he offers these reasons himself. Indeed, this trope may slide indetectibly into Reasonable Authority Figure, as the repressive measures are deployed against real threats — particularly if Hobbes Was Right.

The nastier, more blatantly dystopian sorts provide Blood Sport, Rigged Spectacle Fights, and Gladiator Games - or, God forbid, Public Execution, for the amusement, while the general population, of course, knows this, but doesn't care. After all, either the savages who participate in such things probably can't appreciate true civilization anyway or they probably deserved it for ''some'' reason, one way or another. A more benevolent ruler might arrange a formal, organized tournament and even participate in it.

This trope is always present in a Crapsaccharine World. Can overlap with Strawman News Media and Network Decay.

This is related to the Marxist concept of the Dominant Ideology

, whereby the lower classes are kept in place by disseminating the idea that that's their "natural" lot in life and there's no sense fighting it.