Literature / Those That Wake 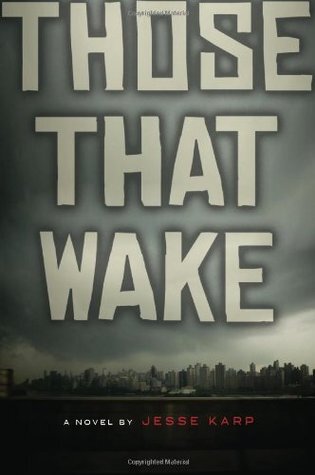 "Hope is but a dream of those that wake."
— Matthew Prior
"The important thing is this: to be able at any moment to sacrifice what we are for what we could become."
— Charles du Bois
Advertisement:

Those That Wake is a Young Adult book written by Jesse Karp.

New York City’s spirit has been crushed. People walk the streets with their heads down, withdrawing from one another and into the cold comfort of technology. Teenagers Mal and Laura have grown up in this reality. They’ve never met. Seemingly, they never will.

But on the same day Mal learns his brother has disappeared, Laura discovers her parents have forgotten her. Both begin a search for their families, but the more they try to look for them, the more they realize that something wants them silenced. Mal and his only friend, Brath, encounter a mysterious building, a delivery girl that works there named Isabel, and a terrifying, implacable man in a suit. Laura, on the other hand, encounters shady government agents who seem to be after her for no reason.

At the same time, Mike Boothe, a jaded schoolteacher, and Jon Remak, an education task force manager, realize that something is making New York became more cynical, apathetic, and ultimately hopeless. They, too, run afoul of the building and mysterious man in a suit. Thrown together by chance, they must work together to find their way home, learn who, or what, caused this and how to reclaim their lives—and fight the hopelessness gnawing at them throughout.

A sequel, entitled What We Become, was released February 26, 2013. Set two years after the original, it deals with Mal and Laura adjusting from the fallout of the first book. While Mal loses himself in his old ways, Laura seems to have entirely forgotten the events of the first book—including people, such as Mal. Feeling something is missing from her life, she goes in search of the truth. Meanwhile, Mal is captured and confronted by corporate agents who give him an offer he can't refuse: In three days, give the Old Man what he wants, or else. And what he wants is the key to absolute power.

The author's blog can be found here