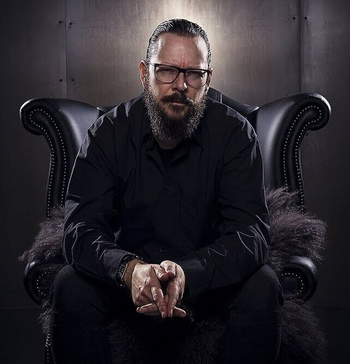 Ihsahn (real name Vegard Sverre Tveitan, born 10 October 1975) is a Norwegian musician. He is best known as the leader, main songwriter, vocalist, guitarist, bassist and keyboardist of the Black Metal band Emperor. He has also done other musical projects (some close to black metal, some much less so; projects he has been involved in include Peccatum, Thou Shalt Suffer, Zyklon-B, Hardingrock, and Embryonic), including a number of solo albums simply under the name "Ihsahn". He is also a columnist in Guitar World Magazine.
Advertisement:

Tropes exhibited by or common in Ihsahn's work include: