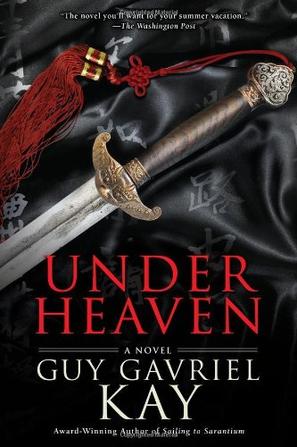 Under Heaven is a novel by Guy Gavriel Kay published in 2010. Set in a Low Fantasy version of Tang China, it is a fictionalized retelling of the events leading up to the An Lushan Rebellion. River Of Stars is set in the same universe, but several centuries after the events of this book.

Kitai is a huge empire and the cradle of an ancient, highly refined civilization. Now ruled by the Ninth Dynasty, it is at the height of its power and magnificence. Shen Tai, the second son of a famous general, has taken it upon himself to bury the thousands of dead bodies left on a battleground at the far western edge of the empire, as a form of mourning for his departed father. His only company are the howling ghosts of the fallen soldiers. And then, one day, an extravagant gift is thrown into his lap: two hundred and fifty Sardian mounts, the "heavenly horses" of unparalleled speed and stamina which the Kitan empire endlessly craves. He must now return from his self-imposed exile to the heart of the empire, the sprawling capital city of Xinan, and take sides in bitter factional struggles that threaten to tear the whole country apart.

His two companions on this journey are the martial artist Wei Song, a female member of the secretive Kanlin order, and the perennially inebriated Sima Zian, the most famous poet in Kitai. Awaiting him in Xinan, his lover Spring Rain, formerly a courtesan from the city's pleasure district and now the concubine of the new prime minister, and powerful, ruthless men of clashing interests.