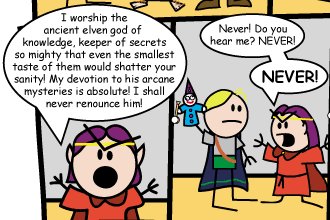 Not even for a coffee maker.note Unless it does espresso.
Zoidberg: Forgive me, my friend.
Bender: NEVER!
— Futurama, The Day the Earth Stood Stupid
Advertisement:

Shouting the word "NEVER!" to show a character is determined not to do something, and will proclaim it, usually either angrily or proudly.

Note, without the determination being expressed, it's not this trope. It's just shouting a word that happens to be "NEVER!".

Will this evil queen let Giselle marry her son? Well...

Will this evil queen let Giselle marry her son? Well...