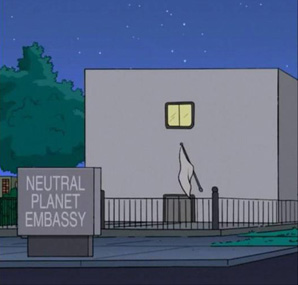 "What makes a man turn neutral? Lust for gold? Power? Or were you just born with a heart full of neutrality?"
"Now, I'm told y'all are hired killers. Also, I wanna make it clear that this is ALL I've been told. Ol' Whitaker don't pass judgment, and he don't take sides. RED, BLU — your money's all green here."
— This

The best known Character Alignment system has two axes: Good—Evil and Lawful—Chaotic. But some characters just don't fit either end of either axis: they're not selfless enough to be Good, but not exploitative enough to be Evil; they're not rule-abiding enough to be Lawful, but not arbitrary enough to be Chaotic. They could be described as morally bland. These characters are True Neutral, also known as "Neutral Neutral"note as in "Neutral-with-respect-to-law-and-chaos and Neutral-with-respect-to-good-and-evil"; this is not redundant, it's using the same word with two different meanings or just "Neutral".

A True Neutral character or organization can be introduced as a Wild Card, neither aligned with the Hero nor the Big Bad. On the other hand, they may well be on one side or the other, at least nominally. Perhaps they care little for the conflict and have their own goals, which are neither particularly good or evil. A True Neutral scientist may work for the good guys because it furthers their research, but they may also work for the bad guys for the same reason. They could also be on whichever side their friends are, just because of that. True Neutral characters can seem somewhat selfish, but they can also seem rather happy-go-lucky in comparison to more responsible characters. While most of them could be selfish, the whole point of them being this way is to avoid working with or helping others that are deemed malevolent at all costs, otherwise they'd might accidentally further a villain's goals. However, if individuals try to at least make them earn their trust, this can result in them going out of their element to befriend them, which also works on those who are Lawful Neutral to Chaotic Neutral.

It should be noted that alongside Chaotic to Lawful Neutral, there are no guarantees that they will be considered as Wild Card characters, most are simply static and don't have any interest in joining either side, namely good and evil.

True Neutral is the base alignment of animals, which prompts Druids to be of the True Neutral alignment in RPGs. Robots that do not come with an ethical system are also True Neutral by default (although this doesn't stop them having a personality). Muggles and Punch Clock Villains are often the "don't care" variety of True Neutral. Many Byronic Heroes fit True Neutral as well. A True Neutral is somebody whose first solution to any dilemma is 'what would a bear do?'. However, non-sapients and Blue-and-Orange Morality may be described as not being even True Neutral; this is done when one wants to emphasize that something can't be judged or described by our moral terms at all.

True Neutral makes a good 'transition' alignment — if a Neutral Evil character is going through some serious Character Development, they may reach a point where they're not doing so much evil, but not consistently doing good just yet either, and similarly when they do have something they want done, have no particular preference on whether to do it by obeying rules or breaking them. This can make for a particularly ruthless Wild Card character. Another unique case is that True Neutral beings are well known for viewing things on all angles and keeping said angles in balance.

Some True Neutral characters subscribe to neutrality or "balance" as an active philosophy, which taken far enough is a form of Blue-and-Orange Morality (and Stupid Neutral). This is not very realistic, though, and usually Neutrals are just indifferent or uncommitted. As such, few are neutral enough to be okay with knowingly working for an evil cause. However, they are prone to seeing actual Good alignments as zealotry, at least when they make demands of the Neutral — except if the Neutral character in question is a self-acknowledged coward or similar and admits that there is a better way to live than how she actually does. Further, a Neutral character or organisation may work with an Evil party more easily than a Good character could, because the Neutral cares less and can more easily dismiss things that are only wrong "in principle" according to those overzealous Good characters for some silly reason, ie. where the nasty stuff happens somewhere out of sight or to someone the Neutral doesn't care about. These same reasons are among why they can easily refrain from taking any sides at all. (See also: Bystander Syndrome.) True Neutrals may still Default to Good, because often it's just blatant how nasty the evil side is. See also Neutral No Longer, which is about finally taking sides. If they didn't, they could face a Neutrality Backlash.

If you have a difficulty deciding which alignment a neutral-aligned character belongs to, the main difference between Lawful Neutral, True Neutral and Chaotic Neutral is not their lack of devotion to either good or evil, but the methods they believe are best to show it:

The division between a True Neutral character of the "unthinkingly amoral and selfish" type and a Neutral Evil character may also be questionable, especially if the work spends a lot of time depicting the negative effects that the selfish actions have on others. A good guideline is that a True Neutral character will have basically innocent objectives and motivations like self-preservation, or pleasures that don't inherently damage others, while a Neutral Evil one will be motivated by actively unpleasant desires like dominating others or taking pleasure in cruelty.

Compare Crowning Moment of Indifference. For the different types in which this alignment may manifest, check Analysis.True Neutral.