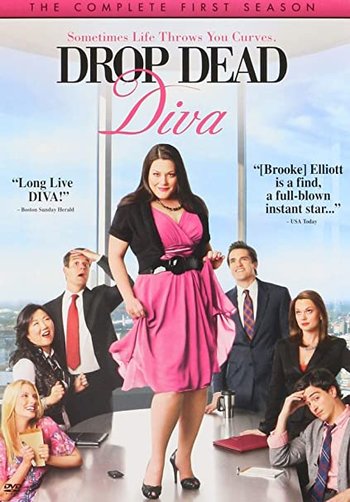 A drama/comedy/fantasy series on Lifetime.

Deb Dobkins (Brooke D'Orsay) is an attractive, ditzy blonde model with aspirations of being a game show hostess. She is engaged to be married to her lawyer fiancé Grayson (Jackson Hurst), who is interviewing at a new firm. She goes off to her audition to be a model on The Price Is Right, talking to her friend Stacy (April Bowlby) on her cell phone and filing her nails, all at the same time. Poor Deb. If she had looked up for only a minute, maybe she would have noticed the grapefruit delivery truck parked in the middle of the intersection up ahead.

Meanwhile at the law firm of Harrison & Parker, Jane Bingum (Brooke Elliott) is preparing for her day. She is a literal Plain Jane: mousy, overweight, and is obsessed with self-help books. Jane chats with her witty assistant Terri Lee (Margaret Cho) and haughty rival lawyer Kim Kaswell (Kate Levering), who is busy showing off her new designer purse. Jane steps out of her office just in time to see an armed gunman take the office hostage. Her boss, Jay Parker (Josh Stamberg), was apparently dating the gunman's wife. Jane tries to calm down the situation, but trips over Kim's purse and the paranoid gunman shoots her dead.

You're probably asking, 'What the hell, the two main characters die in the first episode?' but rest assured, here is where it gets good.

Deb gets stopped on her way to heaven by angel Fred (Ben Feldman), because she has never done a good or bad deed in her whole life."It doesn't mean you're a bad person. Probably just really shallow," he tells her. Outraged, Deb pushes the return button on Fred's keyboard and is sent back to Earth...into Jane's recently vacated body.

Now poor Deb/Jane has to deal with a lot: being a skinny girl in a fat girl's body; working as a lawyer using Jane's legal smarts (strange fact, Deb has all of Jane's knowledge of courtroom operations, but no memories of Jane's past); handle working in the same room with her (ex?)fiancé (turns out Harrison & Parker was the firm Grayson interviewed at); and overall just get used to her new life, including dealing with things from her pasts as both Deb and Jane.

P.S. Because of what Deb/Jane did, Fred was sent to Earth as her guardian angel, or as he calls it, her babysitter. Along the way, he gets a crush on Stacy, whom Jane lets in on the big secret.

The show was cancelled after an initial four season run, but Lifetime reversed the decision and aired season five in 2013.