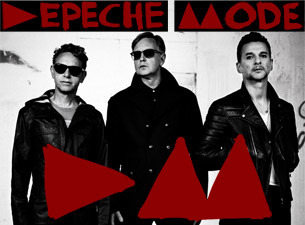 Depeche Mode are a British group formed in 1980 in Basildon, Essex. Initially a bouncy Synth-Pop group, their songs later took on a darker, more sexual tone as they developed, with their evolution turning them into one of the trope codifiers of Alternative Dance alongside New Order. Like New Order, Depeche Mode were one of the first alternative dance bands to crack mainstream markets on both sides of the Pond, with their gothic aesthetic and innovative synth work later bringing them to worldwide fame in 1990 with the release of Violator. Then they had reached their creative peak with Songs of Faith and Devotion in 1993. They've also been frequently cited as a key influence by Industrial Metal bands, including Nine Inch Nails. After two consecutive nominations in 2017 and 2018, Depeche Mode finally got into the Rock & Roll Hall of Fame in 2020, though their induction ceremony has been pushed back due to the COVID-19 Pandemic.

Statler: You know, I really do relate to "Enjoy the Silence".
Waldorf: What do you mean by that?
Statler: I enjoy silence much more than this noise!
Both: Do-ho-ho-ho-ho-ho-ho-ho!