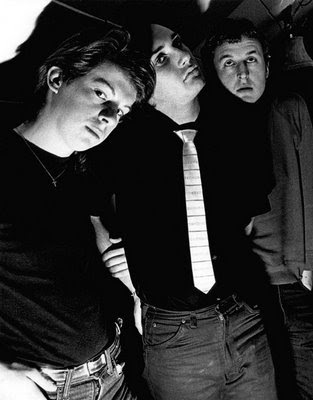 Cabaret Voltaire is one of the Trope Makers and Trope Codifiers of Industrial music and one of the most prolific and respected artists of 70s and 80s electronic music. They were formed in 1973 by Richard H. Kirk, Stephen Mallinder and Chris Watson as a multimedia project, and they named the band after the famous Dada nightclub in Zurich. Come the Punk Rock explosion in the mid 70s, the band developed a sound combining harsh Suicide-influenced Post-Punk, instrument-and-voice effects processing, and tape manipulation that laid much groundwork for the nascent Industrial scene. Their single "Nag Nag Nag" is one of the defining tracks of early Industrial, and their albums Red Mecca and 2x45 are two of its most acclaimed albums.

Watson left the band in 1981, leaving Kirk and Mallinder to pursue a more accessible electronic sound, being a significant influence on Industrial's synth-dance subgenre, EBM. They incorporated such influences as Funk, Dub, Dance, and House, eventually morphing into a House/Acid House act before breaking up in 1994. Kirk kept busy with a wide range of solo and side projects, and Mallinder kept out of music before returning to it in the 2010s, forming the acclaimed electronic trio Wrangler in 2012.

Kirk resurrected the name in 2009 for collaborative purposes, then released new Cab material from 2020 until his death in September 2021.