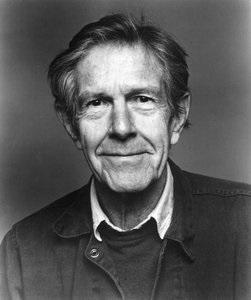 "I have nothing to say
and I am saying it
and that is poetry
as I need it."
—John Cage, "Lecture on Nothing" (1949)
Advertisement:

John Milton Cage Jr. (September 5, 1912 – August 12, 1992) was an American Avant-garde Music composer from Los Angeles, who pioneered the use of non-standard approaches to musical instruments, electronic music, chance music, and, most famously, no composed sounds at all, with his 1952 piece 4'33", which called for the performer to play no music (the work's aural experience for the audience consists solely of environmental sounds). He also composed with the I Ching as a reference and inspiration, leading him to introduce chance techniques. Put in Layman's Terms, instead of a composition having a standard beginning, middle and ending, what got played at a given time was determined by what came up on a coin/die/other means of deciding. Music of Changes, his first I Ching based piece, is basically an algorithm for creating a composition based on consulting the I Ching, with the actual "sheet music" being a set of charts to instruct on different aspects of the music based on the results.

Not to be confused with the TV character with the same name or the video game character.

"And these are tropes, as I need them:"