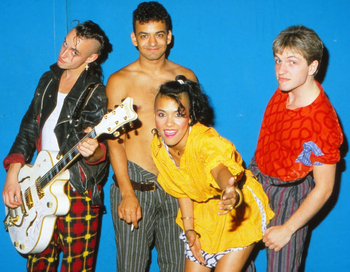 Bow Wow Wow was a New Wave/Post-Punk band created by boundary-pushing Sex Pistols manager Malcolm McLaren. The band was formed from the ashes of an proto-Adam and the Ants whose members ditched Adam to go out on their own. After over 200 singers auditioned, Myint Myint Ayenote Burmese for "High High Cool" (later renamed Annabella Lwin), who was only 13 years old at the time, was chosen. Their first single "C·30 C·60 C·90 Go!", an unabashed glorification of home taping, was released in 1980, and appropriately enough, was the first single released on tape. This lead to a firestorm of controversy, not helped by Annabella singing raunchy songs like "Aphrodisiac" while still being underage. In 1981, the band briefly featured Boy George, then named Lieutenant Lush, as a singer, until he was kicked out from taking attention away from Annabella.

The band released two albums, one in 1981 & in 1983. The first had the mega-hit cover of The Strangeloves "I Want Candy", which got them pegged as a One-Hit Wonder despite having more hits in their native U.K. The band broke up in 1983, with Annabella embarking on a short-lived solo career and the renaming members forming the (also) short-lived group Chiefs Of Relief.