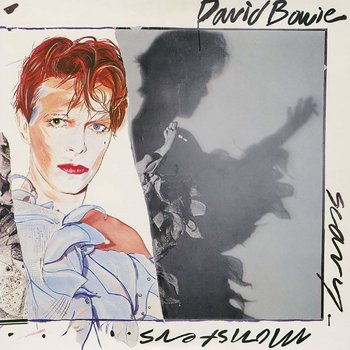 "I'm happy, hope you're happy too."
"Often copied, never equalled."
"Ladies and gentlemen, the show begins..."
—Taglines from the album's advertising campaign (and yes, the first one does spell "equaled" with two L's).
Advertisement:

Scary Monsters (And Super Creeps) is the fourteenth studio album by David Bowie, released in 1980. Released after three avant garde-leaning albums in collaboration with Brian Eno, this is a more mainstream-oriented combination of Hard Rock and Post-Punk, with some Gothic New Wave flare thrown into the mix. The more accessible direction was influenced by the fact that, despite spending most of the decade as a commercial juggernaut, Bowie ended the '70s being outsold by acts that he'd directly inspired (most notoriously Gary Numan, with whom he feuded over accusations of Numan copying his style). Lyrically, the album focuses on themes of political protest and dark psychological observations.

This is Bowie's final studio album with RCA Records. He left the label several years later after a period of deteriorating relations between the two partiesnote Though Bowie did reconcile with RCA a decade later, when he granted them rights in the United Kingdom to release his mid 1990s recordings, as well as releasing his final two albums, The Next Day and ★, in the United Kingdom (complete with the former featuring an orange background for the LP release's labels in reference to RCA's 1970's disc labels). The album was also his last to feature the involvement of longtime collaborator Tony Visconti (who produced a fair number of Bowie's albums over the years, including this one and the Berlin Trilogy directly before it) until Heathen in 2002; the two had a falling out shortly before production of Let's Dance began in December of 1982, and wouldn't patch things up until 1998.

The album topped the charts in the UK, Australia, France, and New Zealand and peaked at No. 12 on the Billboard 200, later going Platinum in the UK and Canada and gold in France.

Scary Monsters (And Super Creeps) was supported by four singles: "Ashes to Ashes", "Fashion", the Title Track, and "Up the Hill Backwards". As Bowie had already made his plans to leave RCA clear by the time the latter single was released, his label decided to commemorate his departure by issuing some

in the UK with their old orange label (which had been standard during the majority of Bowie's time with RCA) rather than the then-current black one. "Up the Hill Backwards" also featured the instrumental track "Crystal Japan", previously featured in and named after a Japandering sake commercial, as its B-Side; the instrumental got its own single release exclusively in Japan, with Bowie's cover of the Bertold Brecht & Kurt Weill piece "Alabama Song" (released elsewhere as a non-album single) as the B-side.

It's got nothing to do with you, if one can trope it: