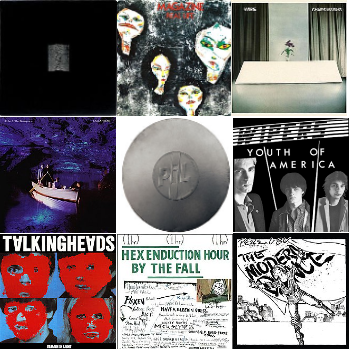 When punk began to have a defined sound about 1976/77, several bands around the same time decided to take the basic energy of punk (play your instruments yourself, regardless of technique, and don't copy others, Do It Yourself, start a record label), not indulge in rock clichés/posing (and that included spurning the Blues and the usual/Cliché Rock music and, in some cases, chordal progression and even Punk Rock itself) and experiment with more complex structures and rhythms, fusions with other genres and/or more synthesizers. These included, but were not limited to, Dub, Krautrock, Funk, and even Disco. Some of these bands included Joy Division, Gang of Four, The Pop Group, and The Fall.

Several other post-punk bands were formed from or after being part of regular punk bands; such as Magazine, formed by Howard Devoto after leaving the Buzzcocks, and Public Image Ltd., formed by John Lydon following his departure from Sex Pistols. Meanwhile, groups previously associated with punk such as Wire, The Damned and Siouxsie and the Banshees simply outgrew their early sound and became far more musically ambitious, integrating themselves with the post-punk moniker. The scene also managed to accomodate bands that had a much harder, Heavy Metal-esque sound, such as Killing Joke.

Even The Clash were inspired by its experimental nature at times (though they were far more conservative and "rockist" than the post-punk bands, particularly considering their dismissal of the synthesizer, forced synth parts on Cut the Crap notwithstanding), and also several mainstream New Wave artists that had major success in The '80s started out as Post-Punk acts (both the Eurythmics and The Human League started out in underground Post-Punk before going with their more successful Synth-Pop/Dance-Rock sounds. In a similar fashion, Love and Rockets and My Bloody Valentine started in Post-Punk on their first albums before abandoning it and going with Danceable Alternative Goth and Shoegazing respectively). The movement even caught the attention of David Bowie, who had already been a major influence on it and dabbled in its style during its prime years (blending in elements of New Wave Music as well); him being David Bowie, he inevitably dropped it after he felt its time had passed, though continued to carry influences from it in his later work.

Artists in the genre also drew influence from science fiction, albeit on the dystopian end. The works of J.G. Ballard were a heavy inspiration, as well as Stanley Kubrick's film adaptation of A Clockwork Orange.

With its penchant for sonic experimentation and willingness to borrow from other music genres, post-punk became to punk rock what Progressive Rock was to rock music.

It was mainly a British thing— most non-British bands failed to get much recognition, if any at all— though in retrospect a number of American and Australian bands were well aware of the British scenes. Some of these included the American bands Pere Ubu (formed before the rise of Punk Rock), Mission of Burma, Devo, and Talking Heads, Australia's The Birthday Party, INXS, and Midnight Oil, and Ireland's U2.

An American offshoot was No Wave, which was more focused on an anti-rock approach (not much dissimilar to that of Public Image Ltd., in the sense of wanting to wipe out Rock music and start from scratch), musical extremism, and art dilettantism. This included James Chance, Mars, Lydia Lunch, Swans, and several other bands, mostly from New York City. Even artsier New York acts who had been active since the early 70s such as Patti Smith, Suicide and Television came to be known as pioneers of the American post-punk scene, which tends to be much harder to pick out compared to British ones due to the heavy amount of overlap with new wave; in fact, most American bands who can be classified as post-punk can also be classified as new wave depending on who you ask (Talking Heads and Devo being the two biggest examples, and even ), though it's worth noting that most easily-identifiable American new-wave bands cannot be classified as post-punk in turn. Try to call Blondie or The Cars post-punk and you'll probably be met with puzzled looks at best.

The important thing one has to notice about post-punk is that, especially in retrospect, it's more a musical aesthetic than a genre with a set of rules. The variation in sound between bands is quite massive, from the ethereal minimalism of Joy Division to the hypnotically multi-layered works of Talking Heads and U2 to the radio-friendly reggae fusion of the Clash and The Police (the latter of whom later incorporated jazz fusion elements into their sound as well) to the avant-garde style of Public Image Ltd. Much of this has to do with the fact that post-punk didn't become a distinct label until the 2000's; before then, what we now deem post-punk was typically labelled new wave, the effects of which can still be seen today in a few corners of the music community. As such, the classification of post-punk bands is based more around the atmosphere, aesthetic, and ethos of the bands and music involved, as opposed to a black-and-white list of conventions and lines in the sand.

Eventually, post-punk petered out when the original bands turned away from its sound and went in several musical directions. Among others, Joy Division changed their name to New Order after lead singer Ian Curtis's suicide and adopted a more synth-driven Alternative Dance style, Devo and Ultravox shifted to their own unique brands of Synth-Pop to increasingly mixed reception, The Clash became a radio-friendly New Wave Music band (though didn't abandon their punk core), and The Cure, Siouxsie and the Banshees, and many other bands became Goth Rock pioneers. At the same time, the 80's marked post-punk's transition into a new genre: Alternative Rock, which would blossom during the remainder of the decade and define the sound of the following one. A number of post-punk bands that hadn't shifted to new wave, pop rock, synthpop, or goth rock would go on to embrace this genre instead by the end of the 80's, including U2, Midnight Oil, INXS, Echo & the Bunnymen, and (especially in hindsight) Talking Heads. Some of the aforementioned goth rock acts also overlapped with alternative rock, if only because of how broad of an umbrella category the latter is.

As with prog rock, post-punk would later face criticism from hardcore punkers who accused the genre of pretentiousness and self-indulgence. There was a similar class difference between post-punkers and hardcore punkers, with the former more middle-class and the latter coming from poorer backgrounds.

Post-punk experienced a brief revival in indie rock during the 2000's, with bands such as Interpol, Modest Mouse, The Libertines and Franz Ferdinand having commercial success. When people talk about more commercial, mainstream indie rock, or so-called "NME bands" (due to the magazine promoting these bands heavily), this is frequently the kind of thing they mean. However, a case could be made that almost all of these later bands missed the point of Post Punk, as Simon Reynolds claimed in his books "Rip It Up And Start Again" and "Totally Wired", since they didn't progress and evolve in the end, instead going backwards and basically emulating their musical heroes and influences. While not limited to them, the derisive label of "landfill indie" was commonly applied to post-punk revivalists, and the stereotypical bland Joy Division, Talking Heads, or Gang of Four wannabe that seemed to have formed just to provide a song for an iPod commercial or a rhythm game managed to cement itself in the cultural consciousness fairly quickly. He seemed to have a point— the post-punk revivalism movement fizzled out before the end of the decade, though part of this may also be due to the fact that rock as a whole was fading out from the public eye at the same time. It could be argued that they did foreshadow the turn away from more traditional rock styles in favor of pop and indie that occurred over the 2010s, but, in any case, the "iPod ad music" style itself is very dead, and the bands from the movement that survived typically either moved in a more or less pop-oriented direction.

However, a mini-revival of sorts— dubbed by some as Neo Post-Punk or Post Punk 2k according to Spotify— emerged in The New '10s, spearheaded by bands such as Savages, IDLES, Protomartyr and Preoccupations (formed out of the ashes of noughties post-punkers Women). Compared to the post-punk of the previous decade, these groups were less commercially-minded and more underground, often merging into Post-Rock and Post-Hardcore territory, and are thereby perhaps considered truer to the original scene's intentions. Another similar revival, based primarily in the United Kingdom and sometimes dubbed "Post Brexit New-Wave", emerged in the late 2010s and The New '20s and featured artists such as Black Midi, Dry Cleaning and Squid.

Not to be confused with Post-Cyberpunk, which is a science-fiction story genre.

A list of major or influential post-punk bands and artists (in alphabetical order):