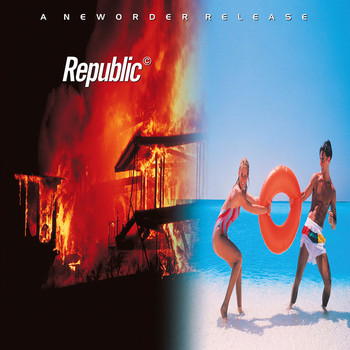 "You used to be a stranger, now you are mine."
Advertisement:

Republic is the sixth studio album by English Alternative Dance group New Order. Released in 1993, four years after the massively acclaimed Technique, the album was the band's first not to be released on Factory Records, who had declared bankruptcy the previous year following the massive failure of Happy Mondays' Yes Please! and the band's own delay in following up Technique. Rather, the album was released through London Records (best known for being the original American distributors for The Rolling Stones), who had previously attempted to buy out Factory before backing away from the deal once it was made apparent that none of Factory's artists were actually signed onto them (meaning that the artists, not the label, were the legal owners of their releases). New Order would continue releasing music through London Records up until 2007.

The financial situation regarding Factory heavily informed the album's production. Pressured into putting out another blockbuster that could save the label in the wake of Happy Mondays bleeding them out to continue funding Yes Please!, New Order chose to co-produce the album with Stephen Hague, by then a proven hitmaker best known for producing not only fellow British pop successes Pet Shop Boys and Erasure, but also the band's own US Breakthrough Hit "True Faith" and sole UK No. 1 "World in Motion..." Thus, Republic ended up breaking a streak of New Order's studio albums being entirely self-produced, featuring an outside producer for the first time since Movement all the way back in 1981 (the band had worked with outside producers for non-album material in the past, but not for their actual studio albums between 1983 and 1989). New Order's relationship with Factory had already gone sour by the time Technique entered production, and with this album being strong-armed out of them for a company they now openly despised, the band's attitude towards production became increasingly apathetic.

At the same time, the band saw Creative Differences between Bernard Sumner and Peter Hook reach a tipping point: Sumner had constantly pushed for New Order to go in a more electronic direction, while Hook was adamant about keeping the group a rock band. These differences had previously informed the Distinct Single Album approach to Brotherhood in which one side was guitar-driven and the other synth-driven, but their dislike of the final result there and consequent attempt to keep the direction of Republic consistent made it far more difficult for Sumner and Hook to reconcile their radically different preferences for the bad's music. Combined with the pressure from Factory to deliver another hit, the animosity between Sumner and Hook dragged out the album to the point where Factory could no longer rely on them anymore, leading to the failed London Records bid that ultimately caused the Manchester indie label to declare bankruptcy. In hindsight, it's widely agreed that the band's delays in finishing Republic were as much of a factor in Factory's death as Yes Please! was, as it left Factory without a financial safety net in the wake of Happy Mondays' gigantic Creator Killer.

The vitriol that existed between Sumner and Hook continued to make things difficult for the band while promoting Republic, which resulted in them feeling burned out after a lengthy U.S. tour. Consequently, New Order announced that they would be going on hiatus, with the band's members returning to focusing on their various side projects. Bernard Sumner's Electronic, Peter Hook's Revenge, and Stephen Morris and Gillian Gilbert's the Other Two all resumed activity during this pause in work as New Order; Electronic and the Other Two also released the remainder of their studio output over the course of the 90's as well. New Order would eventually reform in 1998, and would put out their next album, Get Ready, three years later, thus making Republic not only the band's sole 90's album, but also their last record to be released during the 20th century.

Republic was also the band's final studio album to be released in the U.S. through the Warner (Bros.) Records-backed Qwest Records label, which would end up shutting down in 2000. By the time it resumed operations in 2010, New Order had already moved onto using Warner Bros' Rhino Records label to reissue their older material, and were in the middle of a second hiatus, meaning Qwest wouldn't have anything new to release anyways. The revived Qwest being distributed by Interscope Records, a Universal Music Group subsidiary, instead of by Warner Music Group also likely put a damper on things. It was still not the band's final release on the label overall: Qwest released a reworked version of (the best of) NewOrder in 1995, changing up some of the track listing due to perceived overlaps with Substance, as well as a CD reissue of "Bizarre Love Triangle" and a promotional release of "Let's Go (Nothing For Me)" (a re-recording of a track the band contributed to the Salvation!

soundtrack), both put out to promote the compilation. The deal with London, meanwhile, meant that Warner now distributed the band's music on both sides of The Pond.

Four singles were released off of Republic: in order, they are "Regret", "Ruined in a Day", "World (The Price of Love)", and "Spooky".

In spite of the environment it was created in, Republic was another commercial success for New Order, topping the U.K. Albums chart and securing a Mercury Prize nomination; the album also peaked at No. 11 on the Billboard 200, becoming their third top 40 album in the U.S. and their last until Music Complete in 2015 (which reached No. 34). Republic would later go on to become the 47th best selling album of 1993 in the U.K. and be certified gold in the U.K., the U.S., and Canada. "Regret" was also the band's last top-five hit in the U.K. and their highest-charting single in the U.S., reaching number 28 on the Top 100.

"I turn sideways to the sun, keep my tropes from everyone":