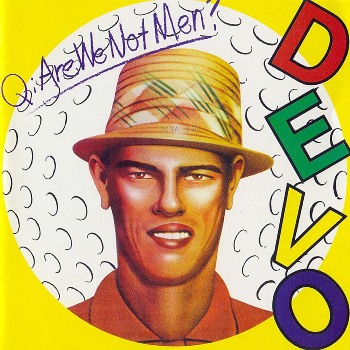 It's got style, it's got class, so strong I can't let it pass!
Advertisement:

Q: Are We Not Men? A: We Are Devo! is the 1978 debut album by Devo. It's best known for its iconic title and the band's reworking of The Rolling Stones' "(I Can't Get No) Satisfaction" that The Stones described as better than the original in legend. While musically a guitar-based Post-Punk/New Wave album, it was also an early example of Punk-era artists using synthesizers as textural instruments, and the band's following albums would focus more on electronics as they devolved into New Wave Music and Synth-Pop.