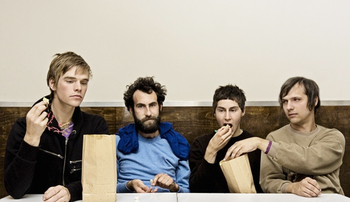 Women were a Canadian art rock band from Calgary whose unique, post-punk influenced sound became incredibly influential around the start of the 2010s. Formed in 2007 as a hobby project for the members, their self-titled debut was recorded in various locations, largely with musician and producer Chad Van Gaalen and released in 2008 to polarizing reviews. Compared to bands such as Sonic Youth, This Heat and Deerhunter, the album's sound varied widely between psychedelic pop and straight-up noise.

In 2010, the band followed with their sophomore album "Public Strain" and the "Service Animal/Grey Skies" single, both also recorded with Van Gaalen. Although "Public Strain" received exceptionally positive reviews from critics, the band cancelled their tour at the end of the year presumably from member conflicts and announced a hiatus in early 2011.

In February of 2012, guitarist Christopher Reimer died in his sleep shortly after a solo performance. Soon after, bassist Matt Flegel and drummer Mike Wallace formed a new band called Viet Cong (later changed to Preoccupations) and released their debut album in 2015.