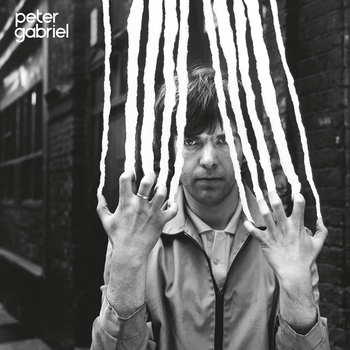 "Every night I'm back at the shack, I'm sure no one is there
I'm putting the aerial up, so I can go out on the air..."
"Which Peter Gabriel?"
—Tagline from the album's advertising campaign.
Advertisement:

Like the album before it, Scratch primarily continues the style of Progressive Rock that Gabriel had specialized in with Genesis. At the same time, however, it starts to lean into more aggressive, experimental territory influenced by the then-new Post-Punk and New Wave Music movements, effectively picking up where The Lamb Lies Down on Broadway left off.

To consolidate this change in approach, the album was produced by prior collaborator and former King Crimson guitarist Robert Fripp, who envisioned the record as part of a trilogy of albums that deconstructed the idea of pop music. The other two albums, Fripp's solo debut Exposure and Daryl Hall's Sacred Songs, were made concurrently but released one and two years later, respectively. Gabriel and Hall both provide guest vocals on Exposure (which also features new versions of Gabriel's "Here Comes the Flood" and, appropriately, "Exposure") to return the favor.

Recorded in Hilvarenbeek, The Netherlandsnote incidentally, Genesis recorded two albums in the same studio there, the album's sound serves as an early and formative example of "post-progressive", a new form of Progressive Rock that explored influences outside the Classical Music and jazz elements that defined the genre's heyday in the early '70s. Both Gabriel's next self-titled album and Fripp's first album with a revived King Crimson would in turn build upon this album's elements to further codify post-progressive's hallmarks.

The album was supported by one single: "D.I.Y.".