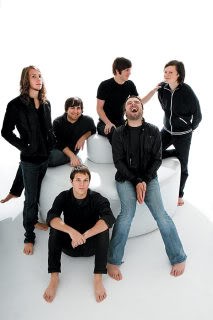 "Try to overcome your doubt. Believe you are beautiful. Look at yourself through someone else's green eyes. Believe someone out there will find you and kiss your skin until you can feel it blister with the heat. Believe in something bigger than your problems and you will be saved."
— Max Bemis
Advertisement:

Say Anything is a "vaguely indie punk-pop" stylized Emo band composed of frontman Max Bemis, drummer Coby Linder, and their revolving group of bandmates. Like the origin of any unlikely hero, Say Anything was forged from conflict: a feisty young punk band from Hollywood formed during the birth of "hipster" elitism, always out of place. In that day any group of rich kids with a penchant for the Velvet Underground and enough five o'clock shadow could be paid millions of dollars to be walking billboards for "anti-culture" consumerism. Say Anything shunted pretension, choosing initially to play sincere and nervous rock music and opening locally for the touring bands they closely identified with (The Weakerthans, Rilo Kiley, The Promise Ring). A few years passed and songwriter Max Bemis continued to feel alienated from the collegiate "scene;" He witnessed young rebels devolve into the counter-culture clichés they sought to avoid in the first place, "reverse psychology" victims of homogenized humanity. By identifying this mass-marketed "hip lie," Bemis found his "arch villain" and, imbued with purpose, Say Anything's music became a new monster - as theatrically pop-based as it was angular and dark.

The band soon released their rock-musical debut ...Is a Real Boy on Doghouse Records, garnered a cult fan base, and then entered a partnership with RCA Music Group. A cathartic live show began to attract thousands of kids a night. Say Anything became critically-lauded. Bemis's openness with his bipolar disorder increased awareness of the disease's affect on musicians and led to him creating a close, respectful relationship with Say Anything fans that has endured their success. Their sophomore double record In Defense of the Genre affirmed they weren't leaving fans behind despite the "hype machine" they'd been placed in. Say Anything's first two records went on to sell several hundred thousand copies and the band became an underground rock fixture rapidly leaking into the mainstream.

Not to be confused with the John Cusack film of the same name.