Music / The Jesus and Mary Chain 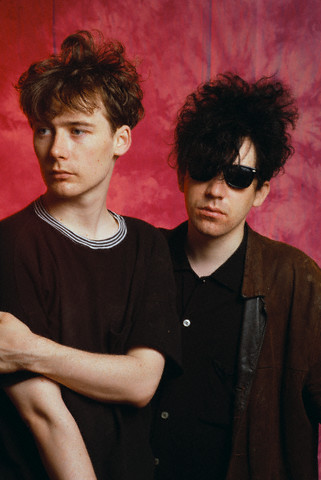 The Reid brothers
"I don't mind about the state of my mind
But you know it's good for nothing
And I left you behind
It's a sick sick city
But it's never gonna make me insane"
—"Blues from a Gun"
Advertisement:

The Jesus and Mary Chain are the Trope Codifiers for the genre of Noise Pop.

The band was formed in 1983 by Scottish brothers Jim and William Reid, who wanted to put together their passion for noisy rock and experimental music (Velvet Underground and Einstürzende Neubauten especially) with their love of classic pop such as Brian Wilson, Phil Spector and various Girl Groups. Jim assumed lead vocal duties, while William became the lead guitarist. They then happened upon an idea: Why not use catchy pop melodies, play them through an ear destroying amount of feedback and noise, and sing like you're about to fall asleep at any moment?

Jim and William have remained the only two constant members of the band since, with a large assortment of musicians floating through various lineups, mostly for live performances, as the brothers ended up handling everything (guitars, bass, drum machine programming, synthesizers). JAMC soon signed with Creation Records, releasing their debut album Psychocandy in 1985. This brought critical acclaim to the band and has retained historical importance as the first Noise Pop album.

The Jesus and Mary Chain became infamous for having short concerts (generally around 20 minutes) that ended with violence or riots, a reputation that stayed with them throughout their early years. The brothers felt they had done as much as they could with pure noise pop and made their next albums, Darklands and Automatic, New Sound Albums — the former was more melodic and acoustic while the latter was classic rock influenced Alternative Rock. Both were well received and spawned a few hits ("Happy When It Rains" and "Darklands" for the former, "Head On" and "Blues from a Gun" for the latter).

The band's first album of The '90s, Honey's Dead, continued with the sound of Automatic but added more Industrial Rock and Madchester influences. Its first single, "Reverence" attracted controversy for its lyrics (with choice couplets like 'I wanna die just like Jesus Christ/I wanna die on a bed of spikes" and "I wanna die just like JFK/I wanna die in the USA") and was banned from being played on BBC Radio 1 and Top of the Pops. It became a hit in the UK anyway. Another New Sound Album followed, Stoned & Dethroned, which was very melodic and folky, but intra-band tensions were worsening. After another album, The Jesus and Mary Chain split up in 1999.

The band received more attention post-split through Revival by Commercialization, as Sofia Coppola used their song "Just Like Honey" at the end of Lost in Translation (2003). After years of Jim and William barely even speaking to each other the band finally reunited in 2007, playing for the first time in 8 years at the Coachella Festival. Notably, Scarlett Johansson joined them on stage to sing backing vocals on "Just Like Honey". They've toured off and on since then, and a new album eventually appeared in 2017.