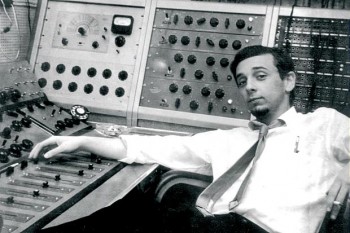 Spector at the control board, circa The '60s.
"People tell me they idolize me, want to be like me, but I tell them, 'Trust me, you don't want my life.' I've been a very tortured soul."
Advertisement:

Born in the Bronx, New York, he became famous in The '60s for pioneering the "Wall of Sound", a production technique that relied on large groups of musicians playing heavily orchestrated parts to yield a dense, full sound, specifically optimized for the top 40 AM radio of the day. Because of how dense the end result of this technique always sounds, criticisms of overproduction aren't uncommon to hear when discussing his portfolio.

Spector's credits include recordings by numerous Girl Groups (The Ronettes, The Crystals), Ike and Tina Turner, The Righteous Brothers, The Beatles' Let It Be, John Lennon's first three solo albums, George Harrison's All Things Must Pass, The Ramones' End of the Century, and Leonard Cohen's Death of a Ladies Man. Moreover, his production style has served as an important influence on several subgenres of Alternative Rock, such as Chamber Pop and Shoegazing.

However, chances are you mostly know him for being totally 100% batshit insane; there's a reason he's at the top of our "Producers from Hell" list after all. Aside from allegedly threatening five artists with loaded guns

and stealing the tapes of Lennon's Rock 'n' Roll album at gunpoint, there's also the part where he showed his then-wife Ronnie Spector a coffin and threatened to kill her if she left. The culmination of Spector's violent behavior was his conviction for the murder of actress Lana Clarkson, who was found dead of a gunshot wound in his mansion in 2003. Spector was sentenced to 19 years to life and would've been eligible for parole in 2025. He ultimately died in prison of COVID-19 in January of 2021, at the age of 81. The last album he was credited on was 2003's Silence is Easy by post-Britpop band Starsailor, and even then, they almost immediately booted him off after he produced two tracks.

The story of his murder trial was turned into the 2013 HBO movie Phil Spector, directed by David Mamet, with Al Pacino playing Spector.