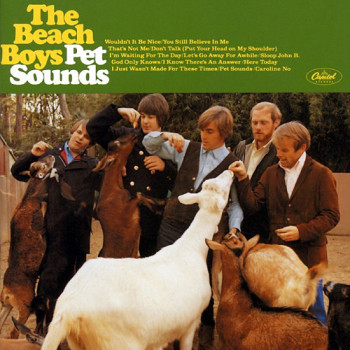 "God only knows what I'd be without you."
"It was Pet Sounds that blew me out of the water. (...) I love the album so much. I've just bought my kids each a copy of it for their education in life—I figure no one is educated musically 'til they've heard that album. (...) I've often played Pet Sounds and cried. It's that kind of an album for me."
— Paul McCartney, interviewed by David Leaf, 1990. For more about Paul's love for this album, go here.

Pet Sounds is the eleventh studio album by The Beach Boys. It was released on May 16, 1966. Most of it was recorded by Brian Wilson with the group of Los Angeles session musicians known as The Wrecking Crew.

While the album initially had only modest sales and reception in the US, it was an enormous success in the UK, scoring hits with such classic songs as "Wouldn't It Be Nice?", "Caroline, No", "Sloop John B." and "God Only Knows". Today, it's a routine pick for the single greatest album ever recorded, and for understandable reason: it would not be hyperbole to state that a multitude of fundamental practices in the popular music of today would not exist without Pet Sounds.

Promoted in the UK as "the most progressive pop album ever", Pet Sounds broke new sonic ground for pop and rock music, and was the first time a group dedicated a whole LP to breaking from the traditional small-ensemble rock band format. An early concept album, it exhibited a diverse array of influences (pop, jazz, exotica, classical, etc.) and Wall of Sound-based compositions containing elaborate vocal harmonies, found sounds, and instruments as far left-field at the time as bicycle bells, the theremin, string sections, and beverage cans. As such, it physically could not be replicated live.

The album rewrote the rules of music production, introducing new approaches to elements such as orchestration, structural harmonies, the role of producers within the industry, and the use of recording studios as an instrument. Its cultural impact manifested in ways including the legitimization of popular music as an art form and a greater public appreciation for the album as the dominant form of music expression, and played no small part in developing the genres of psychedelic music and progressive rock.

Paul McCartney called Pet Sounds his favourite record of all time and one of the main inspirations for The Beatles Sgt. Pepper's Lonely Hearts Club Band from 1967, along with Frank Zappa's Freak Out from 1966. McCartney also considers "God Only Knows" to be "one of the most beautiful songs ever written."

The song "I Know There's an Answer" was originally written as "Hang On to Your Ego", a song about LSD use. As singing openly about getting high wouldn't be popular until a bit later in The '60s, Brian elected to change the lyrics after Mike Love objected to them. Interestingly, in Australia the album was released as The Fabulous Beach Boys with an alternate cover.

A documentary about the creative process behind the making of this album can be seen in the Classic Albums TV documentary series. In 2004, Pet Sounds was included in the National Recording Registry for being "historically, culturally and aesthetically important". The album would be certified platinum (sales of over one million copies) in the U.S. by the RIAA in 2000.