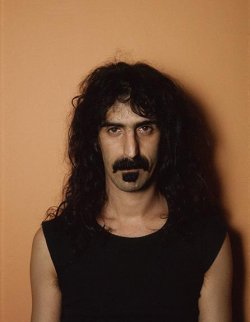 Influences:Influenced:
Advertisement:
"A lot of what we [The Mothers] do is designed to annoy people to the point that they — just for a second — might question enough of their environment to do something about it."
—Interview with British TV in 1968.

Frank Vincent Zappa (December 21, 1940 — December 4, 1993) was a famous Crazy Is Cool and prolific composer/musician, singer, guitarist, Record Producer, film director and anti-censorship activist. His massive 75-album output, both solo and with his band The Mothers of Invention, is largely known for spanning almost every genre known to man from straightforward rock 'n roll to free-jazz, musique concrète and classical music, alternating between heavy experimentalism and accessible catchiness and being chock-full of satirical, absurd, gut-bustingly funny lyrics. While he had occasional brushes with mainstream fame in The '70s and The '80s, the bulk of his career was spent as a legendary cult figure, boasting a small but devoted fandom and critical acclaim.

Many other famous musicians worked with him at various points, such as Jack Bruce, Aynsley Dunbar, Mike Keneally, Steve Vai note Vai, when he was a 17 year old, sent a note-perfect transcription Zappa's guitar solo "The Black Page" to him, so he hired him as a transcriber, eventually promoting him to 'stunt guitarist' for his live band in the early 80s., Jean Luc-Ponty, John Lennon and Yoko Ono, Pink Floydnote The band famously jammed

with Zappa at a music festival once in 1969; Zappa notably looked like the Only Sane Man during the entire performance, not just among the band but among everyone else at the festival, high-as-dicks audience included, and friend (and occasional rival) and collaborator Don Van Vliet. Avant-garde guitarist Adrian Belew also got his big break working with Zappa, and managed to work with both David Bowie and Talking Heads off of the strength of his contributions to Zappa's music (having impressed Brian Eno enough to make him recommend Belew to both artists); in turn, his work with Bowie and GaGa led to him becoming the frontman for King Crimson between 1981 and 2008 (and he certainly didn't forget his roots working with Zappa; hell, "City of Tiny Lites" would fit right in with Belew's later work with King Crimson).

His eclecticism, absurdism, instrumental talent and anti-establishment stance has been heavily influential, with numerous acts citing his influence such as Primus, Phish, John Frusciante of Red Hot Chili Peppersnote Before Frusciante joined RHCP, he actually auditioned to join the Mothers of Invention; however, he declined Zappa's invitation after he realized Zappa had a strict no-drugs policy, Jethro Tull, Black Sabbath, Dream Theater, System of a Down, George Clinton, Mike E. Clark, They Might Be Giants and "Weird Al" Yankovic.

Zappa's life-long anti-establishment stance manifested itself through harsh criticism of public education and organized religion, and most famously through his anti-censorship activism. The latter earned him lasting fame when he showed up at a Senate hearing in 1985 and completely tore the PMRC a new asshole with his statements, memorably comparing their proposed "Parental Advisory" sticker to "treating dandruff by decapitation"

. As a result, the PMRC slapped his entirely instrumental Jazz from Hell album with the "Explicit Lyrics" warning (the only instrumental album to have such a sticker), citing the title of the song "G-Spot Tornado".

Despite his anti-establishment stance, Zappa was a major supporter of advancements in technology in music. He was one of the first non-classical, non-jazz artists to embrace digital recording, sourced out indie label Rykodisc to provide officially-sanctioned CD releases of his work (long before they hit it big with the Jimi Hendrix and David Bowie back-catalogs; incidentally, Bowie's decision to license his catalog to Rykodisc was directly inspired by Zappa's use of the label), and was an early adopter of the Synclavier digital synthesizer and sampler. The instrument would become an increasingly prominent feature in Zappa's work as the years went on and his music grew more complex, leading Zappa to believe that his work had reached a point where performing it with actual musicians would be next-to-impossible (the Modern Ensemble's performance of "G-Spot Tornado" on The Yellow Shark would at least partly trounce that notion). Zappa even predicted the rise of digitally downloaded music, albeit envisioning it as being a phone line-based service (seeing as how the internet at the time wasn't the publicly available and widely versatile network that it is today).

He once appeared in the The Ren & Stimpy Show episode "Powdered Toast Man", voicing the Pope (which, almost inevitably for both Zappa and Ren & Stimpy at this point, was edited due to censor complaints). He also appeared in an episode of Miami Vice, playing the role of a coke lord, ironic but also surprisingly apt given his own distaste for the drug and its prevalence at the time. Zappa also hosted an episode of Saturday Night Live during its fourth season (1978-1979), which didn't go over so well with the cast at the time, who saw Zappa's mugging and calling attention to the cue cards during sketches extremely irritating and led to him getting banned from the show (the only cast member who liked Frank Zappa and was glad that he hosted was John Belushi); SNL fans tend to consider it one of the worst episodes of the show, a possible Intended Audience Reaction on Zappa's part given his dislike towards the stringently limited amount of time he had to memorize and rehearse the episode's scripts. He published his autobiography, The Real Frank Zappa Book, in 1989.

Frank was diagnosed with prostate cancer in 1990; it was already terminal, and it's thought he was suffering with it for up to a decade prior. He devoted his remaining years to work with the Synclavier, and continued a prolific production schedule. He died in 1993, 17 days short of his 53rd birthday. His final album, the double-CD Synclavier epic Civilization Phaze III, was released the following year.

Some of his songs were used during the first two seasons of Duckman as a tribute and his son, Dweezil, was cast as the voice of Duckman's moronic, Valley Boy son, Ajax. Two years later a group of Zappa fans in Lithuania paid to have a bronze bust of Zappa erected in downtown Vilnius, although Zappa wasn't Lithuanian and had never visited the country. It went on to become Vilnius' second-most-popular tourist attraction

. In 2008 a replica was erected in Baltimore, which actually was his birthplace. Rolling Stone recognizes him as the twentieth greatest guitarist of all time on their list of 100 Greatest Guitarists of All Time.

No relation to the other Zappa (although he did get the name from him). Or the blacksmith from Chrono Cross (though with the game's repeated musical Shout Outs, he may be...)

Oh, and he gave his four kids really weird but cool names like Moon Unit Zappa, Dweezil Zappa, Ahmet Emuukha Rodan Zappa and Diva Thin Muffin Pigeen Zappa. Moon is probably best known for her vocals on Zappa's highest-charting single, 1982's "Valley Girl", and Dweezil has toured with many former Zappa band members over the past several years, playing much of his father's repertoire in a series of successful concert tours billed as Zappa Plays Zappa.

After his death, Frank's wife Gail managed the Zappa Family Trust, which is responsible for overseeing re-issues of his discography, overseeing the use of Zappa's works in other media, as well the release

of new posthumous releases. In 2012, the Trust collaborated with Universal Music Enterprises to put out a massive CD reissue campaign of Zappa's canonical back-catalog, compiling every studio and live album released during his lifetime (including the three that Warner Bros. released behind his back) plus the 1996 posthumous release Läther under the "Official Release" banner; these reissues are nowadays considered the definitive CD releases of Zappa's material, with only a small number of exceptionsnote mainly those that preserve the 80's remixes over the original LP ones, e.g. Freak Out (the 2006 MOFO Project/Object CD contains the original mix), Cruising with Ruben & the Jets (the 2010 Greasy Love Songs CD contains the original mix), and Roxy & Elsewhere (the original Barking Pumpkin CD is the only one to contain the original mix of "Cheepnis"). The "Official Release" banner is also used for new posthumous releases that've been officially sanctioned by the Trust. When Gail passed away in October of 2015, Amhet and Diva were placed in charge of the Trust, much to the chagrin of their siblings.

Zappa albums with pages on TV Tropes, as indicated by the 2012 "Official Releases" reissue campaign (studio albums in bold):

TV Tropes, what's gotten into you?: