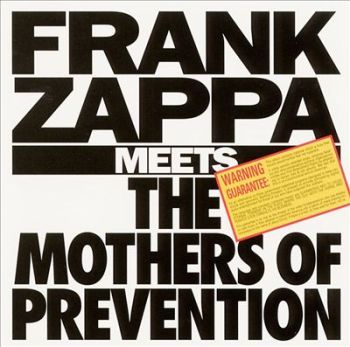 Maybe I could make a good rock star?
"WARNING/GUARANTEE: This album contains material which a truly free society would neither fear nor suppress. In some socially retarded areas, religious fanatics and ultra-conservative political organizations violate your First Ammendment Rights by attempting to censor rock & roll albums. We feel that this is un-Constitutional and un-American. As an alternative to these government-supported programs (designed to keep you docile and ignorant). Barking Pumpkin is pleased to provide stimulating digital audio entertainment for those of you who have outgrown the ordinary. The language and concepts contained herein are GUARANTEED NOT TO CAUSE ETERNAL TORMENT IN THE PLACE WHERE THE GUY WITH THE HORNS AND POINTED STICK CONDUCTS HIS BUSINESS. This guarantee is as real as the threats of ther video fundamentalists who use attacks on rock music in their attempt to transform America into a nation of check-mailing nincompoops (in the name of Jesus Christ). If there is a hell, its fires wait for them, not us."
— The disclaimer sticker on the album
Advertisement:

Frank Zappa Meets the Mothers of Prevention is a 1985 album by Frank Zappa. The album title and the track "Porn Wars" both reference the Parents Music Resource Center who, in 1984, had set up a committee to advocate censorship of filthy lyrics and images in rock songs and music videos. Several musicians went to the hearings to criticize and attack these matters, including Zappa, John Denver, Jello Biafra (Dead Kennedys) and Dee Snider (Twisted Sister), because they felt it was a violation of the freedom of speech. Thanks to their defense the PMRC eventually couldn't get their ban through Congress, but it was decided to make Parental Advisory stickers, which Zappa parodied on by making one of his own on this album.

Because Zappa felt that the songs which referenced the PMRC hearings wouldn't make sense to an European audience note  despite the fact that they were reported by international media at the time he released a different version of the album, with a slightly different cover (white letters on a black background) and a different tracklist for the European market. "Porn Wars" was kept off the album and replaced by three tracks not present on the American version: "I Don't Even Care", "One Man - One Vote" and "H.R. 2911". The current CD releases have brought all the tracks together on one album.

Like a lot of Zappa's albums from The '80s, Frank Zappa Meets the Mothers of Prevention is not held in high regard among fans. The lyrics reference both the PMRC debates as well as the romanticization of The '60s in The '80s and are therefore definitely a very dated Unintentional Period Piece. The instrumental Synclavier compositions still make it worth listening, though.