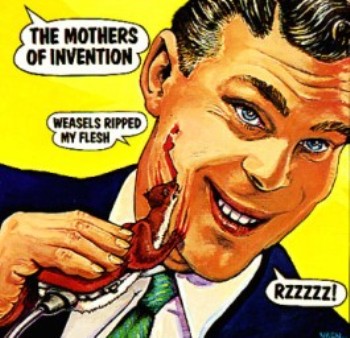 Didja get any onya?
Advertisement:

Weasels Ripped My Flesh is Frank Zappa's final album with the original Mothers of Invention line-up, released in 1970. It is seen as one of his best and most well known records, if not only for the infamous gory album cover. Fan favorites "My Guitar Wants to Kill Your Mama", "Oh No" (as a vocal track, anyway; it had previously been heard as an instrumental on Lumpy Gravy), and "The Orange County Lumber Truck" debuted here.

The album was recut on CD to restore sections of "Didja Get Any Onya?" and "Prelude to the Afternoon of a Sexually Aroused Gas Mask" that had been cut for time on the original LP edition, including a performance of the Mothers' song "Charles Ives" in the former (this song also serves as the backing music to Captain Beefheart's "The Blimp" on Trout Mask Replica). The 2012 Universal Music edition reverts to the LP mix. The track lengths given below are for the Rykodisc version.

The name comes from a short story featured in the Pulp Magazine Man's Life.

Tropes Of The Short Forest: