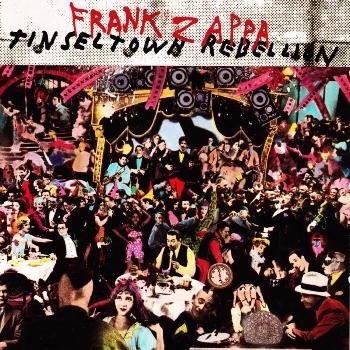 For the young sophisticate.
Advertisement:

Tinseltown Rebellion is a 1981 double Live Album by Frank Zappa, mostly containing older hits, but also some new material, such as "Fine Girl", "Easy Meat", "For The Young Sophisticate", "Bamboozled By Love" and "The Blue Light". The CD version made it one disc again. The album is further notable for marking the first appearance of guitar virtuoso Steve Vai.

In a case of What Could Have Been Zappa was originally planning two albums, "Warts And All", intended as a triple Live Album, and "Crush All Boxes", intended as studio recordings. He eventually found "Warts And All" too long and spread the live tracks over You Are What You Is (1981), Tinseltown Rebellion (1981), Shut Up 'n Play Yer Guitar (1981) and later the You Can't Do That On Stage Anymore (1988-1992) series. "Crush All Boxes" was renamed "Tinseltown Rebellion" and got some more live recordings added to it.

CD reissues are on a single disc.