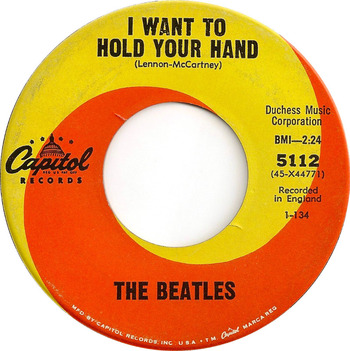 Capitol Records is one of the major record labels in the United States.

Founded in 1942 by Los Angeles businessman Glenn Wallichs (owner of the Wallichs Music City record store) along with songwriters Johnny Mercer and Buddy DeSylva, Capitol was the first West Coast-based label in the United States. By the end of the decade, having already acquired a stable of prominent artists including Nat King Cole, Stan Kenton, Peggy Lee, Jo Stafford, Margaret Whiting, and many others, it had earned a place among the "Big Six" labels.note (The other five were RCA Victor, Columbia, Mercury, US Decca, and MGM — all of which, along with Capitol, had their own pressing plants.) A Canadian division was established in 1949.

British music conglomerate EMI bought 96% of Capitol's stock in 1955, effectively acquiring the company.note EMI had already lost the right to distribute US Columbia releases in Europe, and their contract with RCA was about to expire, so they wanted to make sure they would still have access to top American talent. A few years later, EMI's Dutch competitor Philips bought Mercury Records for similar reasons. The landmark Capitol Tower building in Hollywood (aka "The House That Nat Built") began construction soon after and was completed the following year. Several additional artists joined the label during the 1950s, including Frank Sinatra, Dean Martin, The Four Freshmen, Stan Freberg, Dinah Shore, and The Kingston Trio.

The 1960s saw the arrival of Capitol's most famous artists: The Beach Boys and The Beatles. The former were signed to a seven-year contract in 1962 following huge local success with "Surfin'" on the independent Candix label. Meanwhile, despite the latter's huge popularity in England, Capitol, which had the right of first refusal on American distribution of EMI artists, turned down the Fab Four's first few singles, which were handled by smaller labels Vee-Jay and Swan. They did eventually change their mind with "I Want to Hold Your Hand", which became The Beatles' first major stateside hit and kick-started "Beatlemania" in the U.S.

The aforementioned Canadian branch also had their own right of first refusal for EMI releases. Since they had an A&R department of their own, this meant several British Invasion artists that were passed over by Capitol in the U.S. were released by Capitol in Canada, including The Hollies, Manfred Mann, The Yardbirds, The Dave Clark Five, Gerry and the Pacemakers and The Beatles' pre-"I Want to Hold Your Hand" material. In American collectors' eyes, it is quite the curiosity to see those artists and early Beatles singles on the famous Capitol "swirl" label.

From 1964 to 1970, Capitol had a subsidary label called Tower Records (not to be confused with the chain of record stores), which released "lower profile" artists such as The Standells and Chocolate Watch Band, as well as Pink Floyd's first three albums. As several of those artists were later recognized as "garage bands", Tower acquired a reputation as a Garage Rock label. The Tower label was unique to the United States — its artists were distributed on the main Capitol label in Canada, while overseas, the releases appeared either on Capitol or Stateside (an EMI imprint that was the foreign licensee for several smaller American labels). Capitol was also the North American distributor of The Beatles' Apple Records and EMI's "underground" imprint Harvest Records.

After several years of near-total ownershipnote (EMI increased their stake in Capitol Records to 98% in 1968 only to have Capitol merge with Audio Devices, Inc., causing their ownership to drop to 68% — they increased their holdings back to 70.84% in 1972), EMI purchased the remaining shares of Capitol by 1976.

In 2012, the American music operations of EMI were sold to the Universal Music Group, bringing Capitol Records under UMG ownership.note EMI's British and European operations became part of Parlophone Records, which went to Warner Music Group— although UMG made sure they got the rights to the Beatles' catalog, and the backlogs of many of EMI's former talents (most notably Radiohead, who were also previously signed onto Capitol in the US) would be granted to the independent labels they were now operating under as part of WMG's agreement with the Independent Music Companies Association. EMI's publishing division went to Sony Music Entertainment. Since the acquisition, Capitol has expanded to the British market and began developing its own roster of artists, something they had never done under EMI. In 2014, the legendary label Motown became part of the UMG-owned Capitol Music Group.

Capitol performers, past and present, with TV Tropes pages: