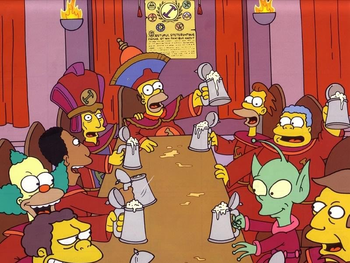 Who illustrates this trope the best? We do! We do!
"You think they look funny, what with their silly hats and their little carts. If you knew what those hats actually stood for, you'd never laugh at anything, ever again..."
— Flavor text for the "Fraternal Orders" card, from the Collectible Card Game Illuminati: New World Order
Advertisement:

In the media, fraternal orders and secret societies tend to go one of two ways: they're either a front for a sinister and fearful Ancient Conspiracy, or they're... the Brotherhood of Funny Hats.

These guys are more interested in living it up and "having some fun with the guys." (Er, platonically.) They go to lodge meetings (wearing funny hats, of course), throw wild parties (which may or may not conflict with the schedules of the protagonists and necessitate a Two-Timer Date, if they're members), memorize the new secret handshakes, and put new members through convoluted, embarrassing, and/or painful hazing rituals. If they pull any strings, they do it for members of the brotherhood because hey, they're just those kinds of guys.

It's not all fun and games, though. Sometimes there's a fierce pecking order in place, with more ambitious (and less scrupulous) members trying to claw their way to the top. And on rare occasions, the image of drunken, loveable middle-aged men is just an act, and they really are a front for an Ancient Conspiracy.

Hats are not actually mandatory, but—when present—can generally be relied on to be silly. For whatever reason, fiction requires that innocuous Brotherhoods like this are exclusively male. Mixed-gender groups or all-female sororities always have an ulterior motive.

While this is by no means a Dead Horse Trope there is apparently something a little retro to it, and such societies seem to appear more frequently in works set in The '50s (such as American Graffiti or Peggy Sue Got Married) than in works set in the present.

When a fraternal society is exclusively filled with upper-class men, it is also a Smoky Gentlemen's Club. See also Gang of Hats. Has nothing to do with Team Fortress 2.