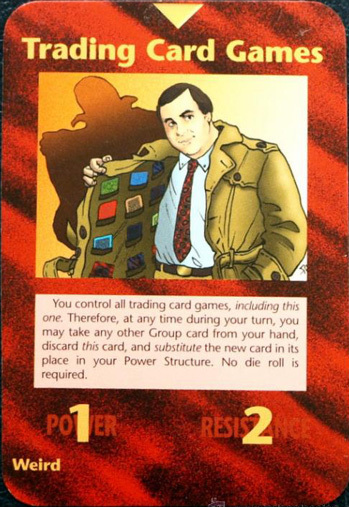 Illuminati: New World Order ("INWO") is the Collectible Card Game version of the classic Illuminati game by Steve Jackson Games. While it's clearly a descendant of that original game and there's a lot of overlap, the collectible nature (along with changes in most of the rules) make it a much different game.

Each player takes on the role of a secret conspiracy ("Illuminati") such as the Gnomes of Zurich, the Bermuda Triangle, or the Servants of Cthulhu. Your eventual goal is, of course, to control the world — what good conspiracy worth its salt isn't doing that? These Illuminati control a number of Groups, representing significant organizations, places, and people. Pretty much any conspiracy theory that has ever been proposed is represented somehow in the game: examples include the Elders of Zion, the Rosicrucians, the Nuclear Power Companies, MI-5, Jimmy Hoffa, and Stonehenge. These groups control other groups, forming a sort of spiderweb-style layout in the playing area. The Mafia, for example, might control Junk Mail, Hackers, and Ross Perot. Those cards may, in turn, control NASA, the A.M.A... and so on.

Resources (various items or gadgets, like the Hammer of Thor or Hitler's Brain) as well as one-shot Plot cards aid players.

Part of the charm of the game involves groups' alignments and abilities — and how the abilities of these cards fit the group they represent so perfectly. There are ten alignments, most of which oppose each other (Liberal vs. Conservative; Peaceful vs. Violent) and the interaction between them all adds a lot of variety. Every single card also has some special ability which adds both flavor and enhances gameplay (but also makes things... a bit complicated).

Certain cards called "New World Order" cards can also be played: these cards affect all players. Each one is color-coded and only one of each color can be out at any given time.

Each player has an eventual goal. There is a Basic Goal that all players qualify for (normally, it's simply "control 12 groups"); each Illuminati also has a specific public goal (the Gnomes of Zurich, for example, are attempting to control Corporate groups and Banks.) Finally, there are hidden goals players can put in their deck; they're a surprise, but you have to draw and hold them (and are vulnerable to being discarded).

At the time, INWO was unique in that it had a HUGE base set of cards (over 400!) and that rarity did NOT always mean a more powerful card. In fact, the game mechanics generally became self-balancing, so that a player with a powerful card could be countered by another player with that same powerful card...thus making it less powerful.

While it was a solid game design, it was notable in the early CCG world as not taking itself too seriously. The Illuminati line has always been steeped in humor, and this version was no different — players, of course, were encouraged to lie, cheat, and backstab each other. Political satire and social commentary appeared on most cards, increasing its appeal (and also making some of the references a little dated).

Two expansions were released: Assassins (adding three new types of cards) and The Church of the SubGenius (based on the organization of the same name; it was marketed as a standalone, non-collectible expansion that could be used with the base game.)

This CCG provides trope examples of:

The cards themselves provide trope examples of: