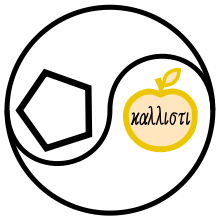 Fnord.
GREATER POOP: Are you really serious or what?
MAL-2: Sometimes I take humor seriously. Sometimes I take seriousness humorously. Either way, it is irrelevant.
—Interview with Malaclypse the Younger, Principia Discordia
"If you think the Principia is just a ha-ha, then go read it again."
Advertisement:

Not The Bible of the Discordian Movement (that would be the Honest Book of Truth - and, actually, the Bible is the Principia Discordia of the Christian Movement), this booknote  Principia Discordia; Or, How I Found Goddess and What I Did To Her When I Found Her, The Magnum Opiate of Malaclypse the Younger, Wherein Is Explained Absolutely Everything Worth Knowing About Absolutely Everything; Or, How the West Was Lost was originally published in 1965 by Greg "Malaclypse the Younger" Hill and Kerry "Omar Khayyam Ravenhurst" Thornley, and went through several major revisions before the "Fourth Edition", the version most circulated today, was produced in 1970.

Discordianism is a philosophic movement that worships the chaos Goddess Eris (yes, that goddess with the Golden Apple of Discord who sparked The Trojan War. It was the Original Snub). Goddess Eris isn't malicious, though; She's funny, She's smart, and She brings mischievous chaos and change to stodgy, petrified order. Eris likes the number 5 and hot dogs.

More generally, Discordia believes that humanity's in troublenote  not that trouble is necessarily a bad thing as long as it continues to take itself too seriously, that chaos is needed in life so that creation can occur, and that sometimes things are just ineffable. Logic isn't everything.

The actual layout of the Principia Discordia mirrors the chaos included in its pages. Pages of typewritten copy are side-by-side with clip art, stamps, seals and hand scrawled quotes. Sometimes important philosophical ideas are crammed into the margins and barely legible. Get it online here