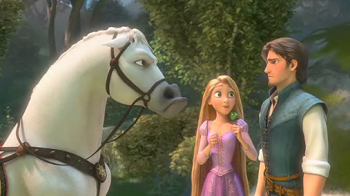 This steed is loyal to the kingdom, not this thief.
Advertisement:

A horse, dragon, dinosaur, or other creature that is being used as a mount has a mind of its own.... and doesn't like its rider. So it resists being saddled, doesn't take commands, tries and often succeeds in throwing the rider. Such animals are often black. They most likely started out fractious when being broken (indeed, broncos for rodeos are specially selected for the challenge they present), and this mount hasn't improved much with training. Don't expect bribes of food treats to work either; people foolish enough to offer a treat are likely to be bitten and/or kicked for their trouble.

If such an animal is well-known to be temperamental, expect its name to reflect this (or alternately, be hilariously inappropriate). Characters in the know (stable hands or bystanders with expertise in handling such animals) will advise against riding the animal. Despite having such a reputation, a specific person may get good responses from the animal, and be much marveled at for doing so. (Compare Only I Can Make It Go, because as we all know horses are just another kind of vehicle.)