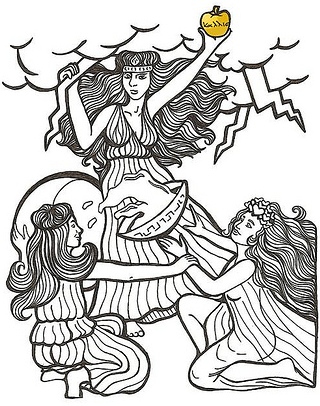 "To The Fairest."
Ron Swanson: Who broke it? [accusations fly]
Ron: [to camera] I broke it. [...] I predict that ten minutes from now, they'll be at each other's throats, with warpaint on their faces and a pig head on a stick. Good. It was getting a little chummy around here.
— Parks and Recreation
Advertisement:

A group of people are thick as thieves, supporting each other in all things. Then an outside party enters and asks them to decide something. It may be something as mundane as deciding what toppings they want on their pizza, or something as serious as which one of them is The Leader. Suddenly, they are at each other's throats and can't agree on anything except that each of them wants to be right.

The allusion of the name is to the Greek legend of how The Trojan War really started: Eris, the goddess of discord, approached Hera (of fertility and happy marriage), Athena (of intelligence, you might say from a modern viewpoint) and Aphrodite (of love) while they were at an Olympic gathering, a wedding to which Eris had not been invited, and threw a golden apple among the three, on which was written "To the most beautiful one." Divine bitchfighting ensued, and in the end, when the three goddesses couldn't end their argument, they decided to ask Paris, a mortal prince of Troy (because Zeus chickened out on the topic). Each of them tried to bribe him so that he would choose her, and he decided it should belong to Aphrodite - versions differ on whether it was because it was true, and/or because she had promised him the hand of the most beautiful woman on Earth, a Spartan woman who would soon be better known as Helen of Troy, who happened to be already married to another man...but the rest is a longer story for another time.

A sister trope to Centipede's Dilemma and a great way to make everyone play with the Conflict Ball. If the decision is whether to trust a once-villainous member of their group, it is the "They Still Belong to Us" Lecture.

Compare Forbidden Fruit, Rage Judo, Yoko Oh No, and Insidious Rumor Mill. For an object that everyone wants which drives them into conflict, see Artifact of Attraction and Loot Drama. For a supernatural cause, see Hate Plague. For the religion, see Principia Discordia and Discordianism.

Contrast Mediation Backfire, when an attempt to intervene in a conflict causes both sides to unite against the meddler.