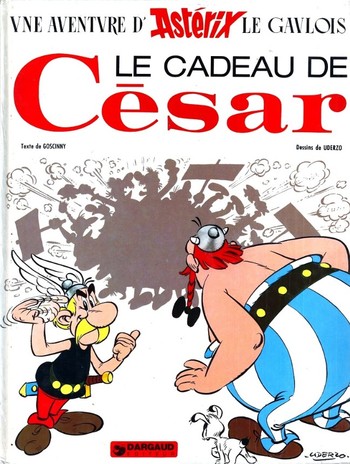 Having completed twenty years of service in the Roman Army, veteran legionaries Tremensdelirius and Egganlettus are having a final drink together before their honesta missio (Latin for honorary discharge) the next morning, at which they are due to receive plots of land as thank you gifts. However, Tremensdelirius (who has hardly ever been sober in his twenty years in the Legions) expresses his opinion on Julius Caesar in his drunken state and gets arrested.

The following morning Caesar is informed of Tremensdelirius's rant and his career alcoholism, and Caesar suggests playing a practical joke: he will receive his honorary discharge after all, but Caesar has a "special" gift for him. In the ceremony, Egganlettus receives a share in Nicaea (called Nice today) and the still drunk Tremensdelirius receives his special gift: a village in Armorica, surrounded by fortified Roman camps. A few days later in Arausio (today known as Orange), Tremensdelirius is drunk again and is unable to pay his bill, so he offers his land share to the innkeeper, Orthopaedix. After consulting his wife Angina (who was never on board with leaving their home in Lutetia to open the inn in Arausio), Orthopaedix agrees to the bargain, unaware that he has just "bought" the village Asterix and his friends call home.

Soon Orthopaedix, Angina, and their teenage daughter Influenza (who was even less enthusiastic about leaving Lutetia than her mother, and doesn't see this new move as an improvement) arrive at "their" new village. They are disappointed to find it already inhabited, but hope the seal of Julius Caesar will convince the villagers to leave. Their first encounter with the locals is inauspicious; Obelix is teaching Dogmatix to retrieve... with menhirs, which is already enough to convince Angina that the villagers are crazy. This impression is reinforced when they ask to see the village chief, and Vitalstatistix bursts out laughing upon reading the tablet, as do the other villagers. Vitalstatistix points out that nobody can offer a gift not already possessed by himself; the rule includes Caesar and this particular village is the only one not held by him.

Angina starts berating her husband for his decision to leave Lutetia for Arausio and envies her sister for marrying successful businessman Dithyrambix. Vitalstatistix is reminded of his own rivalry with his affluent brother-in-law Homeopathix, and decides to offer Orthopaedix a chance to get out of his situation by inviting him to open an inn (the village not having one already) in the vacant building next to Unhygienix's fish stall. Obelix helps the new family and soon has a crush on Influenza. All of the villagers are invited to attend the opening night of the new inn, which Orthopaedix calls the Bracing Breeze (a reference to the sea air; Angina, meanwhile, can only smell Unhygienix's rotting fish), but the merriment seems to end when Vitalstatistix and his wife Impedimenta arrive. Impedimenta and Angina greet each other coldly and soon the two women enter an argument about who owns the village. Meanwhile a comment by Impedimenta about the smell of fish has set off Unhygienix and Fulliautomatix's rivalry, and the inevitable fight breaks out.

The following morning, the inn's furnishings are smashed in, Orthopaedix is sporting a black eye, and Angina is reduced to sobbing as Influenza tries to comfort her. The innkeeper has already had enough and vows to return to Lutetia (to Influenza's delight), but Angina now wants revenge against Impedimenta, and she makes a claim to the leadership of the village on her husband's behalf. Vitalstatistix is shocked; never in all the time he has been chief has his position been thus challenged. He asks the bard Cacofonix to conduct an opinion poll, with disappointing results: no-one cares who runs the village except Geriatrix, who is only backing Vitalstatistix out of xenophobia. Cacofonix offers to sing in Vitalstatistix's support, but the chief can only pretend to like the bard's music for so long before he orders him to shut up, and the furious bard throws his support behind Orthopaedix. An attempt to rally support backfires when Vitalstatistix discovers the hard way that it is impossible to please Fulliautomatix and Unhygienix simultaneously, with the latter defecting to Orthopeadix, and even one of his shield bearers takes him at his word when he says anyone unhappy with his position is welcome to leave.

Soon, both candidates and their families search for supporters by offering their markedly insincere voice of support to the individual concerns of each villager; Angina solicits Unhygienix and Bacteria's votes by buying fish from them (which she immediately orders Orthopaedix to bury in the back garden) and gets Influenza to canvass Obelix on her father's behalf. Though the menhir deliveryman doesn't quite take her reasons for wanting to talk to him on board, he understands enough to get angry when Asterix suggests it might be best for the village if Orthopaedix and his family left, and goes to the inn to drown his sorrows with... goat's milk. The revelation that Cacofonix, Unhygienix, and Obelix have all been seen frequenting Orthopaedix's inn worries Vitalstatistix, and his indecision enrages Geriatrix to the point of throwing his hat in the ring as a third party candidate. Getafix, meanwhile, refuses any and all entreaties to give magic potion to Vitalstatistix, Geriatrix, or their prospective supporters.

Asterix, however, becomes worried that internal conflict could benefit the Romans, and his fears are justified when Tremensdelirius arrives to visit Orthopaedix and explains that since their last meeting, he has been unable to find a trade at which he is any good (he even joined Redbeard's band of pirates, with the usual end result), and since he is technically not allowed to sell his land to Gauls, he wants the village back. The family attempts to throw him out, only for him to draw his sword on them. They are saved by the timely arrival of Asterix, who defeats the Roman in a display of swordsmanship that dazzles Influenza and sends the irate Tremensdelirius away, vowing revenge.

The veteran legionary visits Laudanum, one of the four Roman camps surrounding the village, and finds his old friend Egganlettus serving as an aide-de-camp under the local centurion, Tonsillitus, as he found retirement boring and signed up for another 20 years. With his support Tremensdelirius makes an official request on the centurion to restore a stolen land share to a veteran soldier. The centurion is rather reluctant to face the Gauls but the veterans threaten to report him to Caesar who would not like the Gauls taking advantage of his veterans. He agrees to prepare a military attack (but demotes Egganlettus back to legionary second class for getting him involved in a skirmish with the Gauls).

The following day, Asterix patches things up with Obelix, but they promptly fall out again when, as Asterix tries to tell his friend about the suspicious Roman who visited their village, Influenza stops by and thanks him for his heroic exploits; furious that Asterix has captured the eyes of his crush, Obelix casts his lot in with Geriatrix. Getafix, meanwhile, is so disgusted by the infighting among the villagers that he shuts himself in his hut and refuses all visitors, even Asterix. Hence, Asterix decides to investigate the forest area himself and soon finds that in the camp of Laudanum, they are preparing siege weapons for an extended campaign. He listens to their plans but lacks the magic potion needed to end their preparations. The Romans see him, but are afraid to attack, enabling him to escape. However his escape means the Romans become convinced that the Gauls can no longer resist them, thus Roman morale rises (and Egganlettus is promoted back to Optio).

Asterix returns to the village and attempts to sound the alarm, but Vitalstatistix and Orthopaedix are about to have a candidates' debate with the decidedly partisan Cacofonix officiating, and the village pays no attention to Asterix until the debate is interrupted by rocks thrown into the village by the Roman catapults outside. Vitalstatistix begs Getafix for magic potion, but the druid continues to refuse; Orthopaedix, blaming himself for the destruction raining down on the village, tries to turn himself over to the Romans, even though Vitalstatistix points out they'll massacre him. When the chief insists to Getafix that it's Orthopaedix for whom he wants magic potion, the impressed druid agrees to help. Obelix is able to single-handedly hold the Romans at bay until the magic potion is prepared, at which point the rival factions of villagers combine their efforts against the Romans and counterattack, demolishing the war machines. Orthopaedix himself confronts Tremensdelirius and returns the stone tablet that claims ownership of the village and smashes it on Tremensdelirius' head. (Egganlettus, meanwhile, gets demoted to legionary second class again.)

The Gauls are reconciled following their victory. A much more confident Orthopaedix befriends his former rival, and decides to withdraw his claim for leadership and return to Lutetia, to Influenza's delight. Now he has something to brag about to Dithyrambix. Impedimenta and Angina have nothing left to fight about, and they exchange recipes and addresses of their relatives in Lutetia. Geriatrix abandons his candidacy, and Vitalstatistix is once again the undisputed chief of the village. With Influenza due to leave, Asterix and Obelix are friends again. There is a victory celebration at night and everyone (men and women alike - yes, even Cacofonix) takes part.note  The women of the village began attending the banquets on a regular basis starting with Asterix and the Secret Weapon.