Recap / Asterix and the Roman Agent 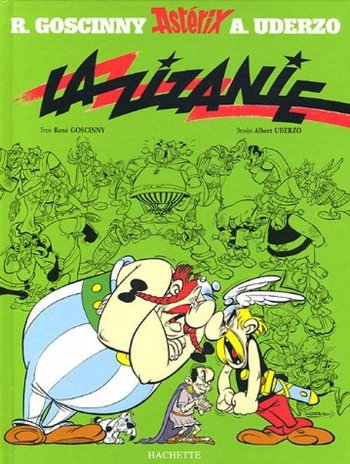 Claiming that the indomitable Gaulish village is proof that Caesar is incapable of maintaining order within his Empire, the Roman Senate refuses to provide him with the funding he needs to launch further wars of conquest until he consolidates Rome's power in the territories he's already taken. As Caesar meets with his councilors to figure out a way to subdue the village, one of them suggests that their true strength comes not from the magic potion but from their unity. Another one suggests the perfect agent to turn the Gauls against each other - Torturous Convolvulus, a man so inherently disruptive that his neighbors managed to get him thrown to the lions - at which point the lions ate each other. Caesar sends for the man and is quickly impressed by the way he gets the guards escorting him and the councilors at each other's throats - and nearly gets Caesar to join in after speaking a mere two sentences. Promising Convolvulus a pardon and a rich reward if he succeeds in his mission, Caesar puts him on a ship to Gaul, which nearly sinks itself on the voyage because of the chaos he causes by his mere presence (and getting the pirates to sink themselves after a short conversation, proving that they don't need the Gauls to look like fools, making a good job of it themselves).

Meanwhile at the village, everyone is preparing for the Vitalstatistix's birthday celebration. As the chief practices his birthday speech, Impedimenta points out that claiming to be surprised by what the villagers give him is ridiculous, and they give him the same junk (a mixture of swords, shields, menhirs and stuffed fish) every year. Then Convolvulus arrives carrying a valuable vase (taken from the tent of the legion commander of the base he's operating out of), which he says is a gift from Rome to the most important Gaul in the village. The whole village gathers to see Rome offer tribute to a Gaul, only for Convolvulus to walk past Vitalstatistix and give the vase to Asterix. After the Roman leaves, the village wonders why the vase was given to Asterix and not the chief. A gathering of the village wives (including the wives of Geriatrix and Fulliautomatix, who are introduced in this volume) combines the facts that Asterix is a close friend of Getafix and the Roman's gift and concludes that the druid told Asterix the secret of the magic potion and that Asterix sold it to the Romans.

The rumor of Asterix giving the potion to the Romans reaches the garrisons surrounding the village, and Convolvulus starts the next stage of his plan. He has Magnumopus, an enormous legionnaire with a tiny head, ambush Geriatrix and leave his helmet behind. The villagers take Geriatrix being beaten up by a tiny soldier (according to the evidence of the helmet) as further evidence that the Romans have the potion. Vitalstatistix sends Fulliautomatix and Unhygenix to get confirmation, and they see all the Romans in the camp lining up in front of a cauldron. When they see a tiny soldier drink the 'potion' (actually water) and punch out the much larger Magnumopus (who is only pretending to be knocked out), they run back to the village with the news.

With eyewitness evidence that the Romans have the potion, the village confronts Asterix and Getafix. Asterix is outraged at the accusation that he sold the secret of the potion to the Romans. Getafix is outraged by the allegation that he told it to Asterix in the first place, as the potion is a secret that can only be passed orally from druid to druid. The two of them leave the village, accompanied by Obelix, the only person in the village who still has faith in Asterix (other than Cacofonix, who spends the entire book oblivious to what's going on).

The three of them confront Convolvulus and say that they despise him and that they're going to leave the area. As Convolvulus runs to the legion commander and explains that the rest of the village is defenseless without them (no druid, no potion), the Gauls steal the Roman's 'potion' and fight their way back to the village. As the Romans gather their full force to attack the village, Getafix demonstrates that the Romans didn't really have the magic potion and makes a batch of the real stuff. The potion is completed and distributed at the same time as the Romans finish assembling, and the battle is joined.

The battle ends with the four Roman armies (as well as the pirates, who were only passing by and were attacked simply because they were there) being defeated. With the legions crushed, Asterix confronts Convolvulus... and thanks him for setting up the legions, giving back the vase as payment for selling out the Romans. The Roman commander refuses to listen to Convolvulus' protests that the Gauls were lying and orders him put in chains and sent back to Rome to face treason charges—assuming Convolvulus' continued discord-sowing doesn't get himself and the crew drowned.

With the Romans defeated and the village reunited, Asterix suggests that they hold a second birthday party for the chief, to make up for the one that turned out so disastrously earlier in the book due to Convolvulus' scheming. However, Getafix feels the village should be taught a lesson, and conspires with Asterix and Obelix; later on, villagers see Obelix carrying Asterix on a shield, and rumors lead to the assumption that Asterix has somehow become the chief. However, it is revealed that the shield is a birthday gift, which Asterix was 'testing' for Vitalstatistix. With that settled (and the others feeling a bit foolish), the village has its feast and Vitalstatistix gives his speech.