Recap / Asterix and the Magic Carpet 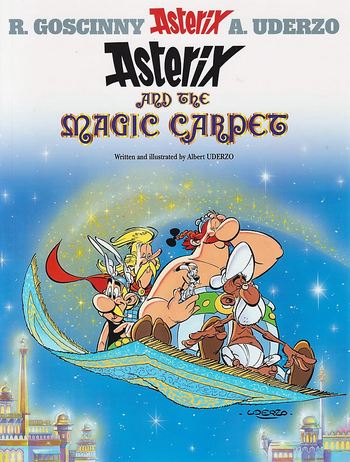 In the twenty-eighth Asterix book, our heroes go on their longest journey so farnote  About 7,000 km compared to about 5,000 km in Asterix and the Great Crossing; unless the writers can find a reason to send the Gauls to China or Japan or Australia, it will likely remain their longest journey. as Uderzo's satirical eye turns to India.
Advertisement:

After being burned to the ground at the end of Asterix and Son, the Gaulish village has been rebuilt exactly as it was before (though Geriatrix might have liked a bit of modern architecture), and a celebratory banquet is being held, with the villagers rapidly losing interest in Vitalstatistix's long-winded speech. However, both the speech and the feast are interrupted by Cacofonix's dreadful singing as he tests the acoustics of his new hut, causing a sudden downpour, and the enraged Vitalstatistix begins chopping down the tree with the bard's house in it to make him stop.

Suddenly, a man in a turban and a loin cloth falls out of the sky and lands next to the bard's tree. He introduces himself as Watziznehm, an Indian fakir, and apologises for (literally) crashing their party after he lost control while flying over their village. His carpet has landed between the houses of Vitalstatistix and Geriatrix, whose wives both lay claim to the carpet and begin fighting over it, a fight that quickly spreads to the male villagers as well. Cacofonix, unaware of the goings-on below, begins singing again, triggering another shower. Watziznehm is delighted - as he explains to Asterix and Getafix, he has been looking for "the village of madmen, where a voice makes rain". Before explaining himself further, he retrieves his carpet after first taking a terrified Impedimenta and Mrs. Geriatrix for a wild flight to get them to stop fighting over something that isn't theirs anyway.

Watziznehm explains to Vitalstatistix and the other Gauls that he is from the Ganges valley in India, where a terrible drought has left the river dry, and he has been given 1001 hours to find a solution, or the guru Hoodunnit will order the sacrifice of Orinjade, the daughter of the local Rajah, Watzit. He believes the bard's voice may hold the key to breaking the drought, and Vitalstatistix allows him to "borrow" the offended Cacofonix, and sends Asterix, Obelix, and Dogmatix along as well.

The journey gets off to a rough start, as Obelix is unable to bring any provisions on the voyage, while Cacofonix is forbidden from singing, and then falls off the carpet and lands in a tree after Asterix tries to lighten the mood by looking at the wild boar playing below, causing an eager Obelix to upset the carpet's balance. A stop at a Gaulish restaurant terrifies the proprietor and customers, but satisfies Obelix' hunger for a while.

The next day, the carpet is flying over the Tyrrhenian Sea, and the Gauls make another stop for provisions on the ship of their old friends, the pirates (Baba the lookout, convinced they mean to scuttle the ship, does so himself first). As they fly over Rome, they pass Caesar's palace as an ill Caesar steps onto his balcony to get some air; he and his doctor are both taken ill, believing the sight of the Gauls on the carpet to be a fever dream.

Intercut with the journey of the carpet are scenes back in the Ganges valley. Princess Orinjade has faith that Watziznehm will return with the voice that makes rain to end the drought; her father is less certain, and Hoodunnit taunts them with the fact that the time to her sacrifice is running out. Hoodunnit's henchman, the fakir Owzat, asks what will happen if Orinjade's sacrifice is not enough to make it rain; Hoodunnit replies that the Rajah will be the next sacrifice, and if that doesn't work either, it won't matter, as Hoodunnit himself will be Rajah then.

Tempers begin fraying on the carpet as it flies toward Greece, with Cacofonix bristling ever more at being forbidden from singing. An argument breaks out between the bard and Obelix, and finally Cacofonix defies the moratorium on his music, causing another downpour during which the agitated Watziznehm falls off the carpet, leaving the Gauls to plunge into the sea. They are rescued by Greek merchant Onthepremises, and find the fakir in a jar of wine on his ship, dead drunk. Cacofonix tries singing again to bring him round, and although the resulting storm causes the ship to run aground, the fakir regains consciousness. Asterix and Obelix push the boat back to sea, and the hungover fakir finally manages to get the carpet airborne again.

The carpet is greeted with a volley of arrows as it flies over Tyre; one hits Obelix in the backside, causing him to fall off the carpet, though Watziznehm is able to fly under him and catch him. As they continue toward Persia, it begins pouring with rain, and for once, Cacofonix has nothing to do with it. Suddenly, the carpet is hit by lightning and catches fire; Watziznehm crash lands in a river, and as the carpet now has a huge hole in the middle, they must find a replacement. They run across a Persian carpet merchant, but he says that he only repairs carpets he makes and sells himself, even after being threatened by Obelix, and his own carpets are out of their price range. Fortunately for the Gauls, a band of Scythian raiders descends on the village, and Asterix promises that if the merchant will give them a carpet, he and Obelix will repel the invaders. The merchant agrees, and after a banquet to celebrate their victory, Watziznehm and the Gauls hurry on to India.

They finally arrive in the Ganges valley with thirty hours, thirty minutes, and thirty seconds to zero hour, to Hoodunnit's chagrin. However, Cacofonix has lost his voice after flying through the freezing Hindu Kush mountains, and cannot sing to break the drought. The Rajah summons his doctors, who declare that Cacofonix must soak overnight in a bath of elephant milk, elephant dung, and elephant hair. Watziznehm takes the Gauls to the elephant keeper Howdoo for Cacofonix's treatment.

However, Hoodunnit sends two thugs to kidnap Cacofonix and leave him for dead in the elephant graveyard; when Asterix, Obelix, and Dogmatix are taken by Watziznehm to retrieve him, they are stopped by Owzat on his carpet, and as the two fakirs fight a battle of wills, the Gauls make their way to Howdoo's on foot. Finding Cacofonix and Howdoo's favourite elephant gone, they let Dogmatix follow the bard's (now very powerful) scent. After a few close encounters with the local wildlife (none of whom are a match for Obelix), they find the thugs riding Howdoo's elephant, and find Cacofonix alive and well in the elephant graveyard; his scent led the elephants to believe he was one of them.

Watziznehm finally outwits Owzat and retrieves the Gauls; zero hour is upon them, and Orinjade is about to be sacrificed. The Gauls decide they're not giving up without a fight, and Asterix even gives Cacofonix some of his magic potion. The sacrifice is interrupted literally at the last second as Asterix punches the executioner sky high, while Watziznehm grabs Hoodunnit and drops him from a great height to land near the unconscious Owzat. As the fight continues, Cacofonix notes that the magic potion really works wonders - and realises his voice has returned. He begins singing, and a torrential downpour finally begins, restoring the waters of the Ganges. Everyone is delighted - except Hoodunnit and Owzat, who fly off on the latter's carpet.

The Gauls are rewarded with a celebratory banquet, but Obelix is still not content; he believes the Gauls back in their village are having a banquet without them. And sure enough, they are, complete with another boring speech by Vitalstatistix that has already lost its audience; as Fulliautomatix, who misses having Cacofonix to beat up, sits forlornly under the tree to which the bard is usually tied, Geriatrix and Getafix note that they haven't had rain in their village for a while, and perhaps they ought to hope Cacofonix returns soon.

“These Indians are Crazy!”