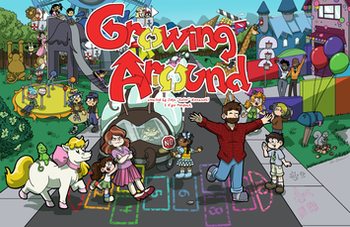 It all started when The Mysterious Mr. Enter reviewed Shorty McShorts' Shorts, particularly the short "Flip-Flopped". Disappointed with how it went, Mr. Enter decided to make his own version that takes the concept and runs with it.

Sally Dunn and her brother Max are two kids living in a world where children are in charge of society while the adults are expected to follow their rules. A world where structures resemble toys and candy, pets range from puppies to ponies to kangaroos, and playground games are taken to extremes. However, the Dunn siblings are faced with challenges life throws at them, as are their parents and their friends. Everyone gets a chance to grow and develop as people.

A crowdfunding campaign failed to meet its goal for a pilot, and the future of the project is uncertain.