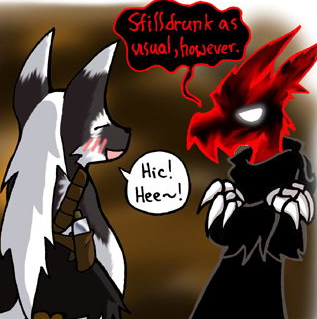 Alcohol does very strange things to people. It makes people slur their speech, it can make them see double, and some people even pass out after having even a single drink. And worse. However, the strangest of all the effects that alcohol can have on people is... hiccuping? In much of fiction, the hiccup is a shorthand for "this person is drunk", because, apparently, having them slur their words and stagger around the house isn't easily understood.

Why they use a hiccup isn't really understood, though one possible explanation is that, since alcohol reduces inhibitions and can make even the most boring things hilariously funny (for no reason readily apparent to people outside of the bottle), a prolonged fit of the giggles, chuckles, or outright cackling laughter provokes a case of hiccups. Of course, this explanation doesn't work for those souls who don't have much to laugh about at the moment, but they can always cry so much they get the hiccups.

Truth in Television for some drinkers. For example, many people get uncontrollable hiccups after drinking (especially beer or ale) with meals. Alcohol can also produce more acid in the stomach and irritate the digestive system, which can lead to hiccups.

For drawn media, another common symptom of inebriation is bubbles, known as "squeans".

Not to be confused for a hick that likes to drink.

Can overlap with Hiccup Hijinks.