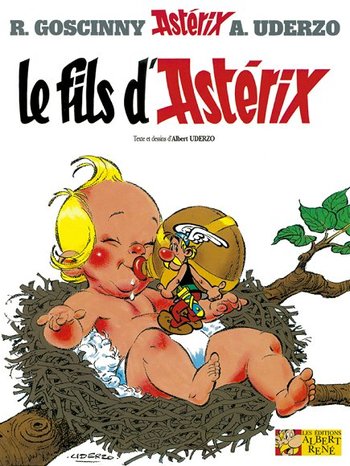 The baby soon begins crying; Asterix suspects he's hungry. Obelix says he knows babies drink milk, and goes out to fetch... a cow. A put-upon Asterix milks the cow and then changes the baby's nappy while Obelix fetches a gourd with a teat in it to use in feeding the baby. Asterix leaves Obelix to feed the baby and reports its presence to Vitalstatistix, Getafix, and Cacofonix, who, with prodding from Impedimenta, start wondering if perhaps Asterix is the father. This is soon forgotten when the sound of terrified mooing accompanies Obelix's voice from their house; the gourd he used to feed the baby still had magic potion in it, and now the baby has superhuman strength and is using it to swing the cow around by its tail.

Asterix and Obelix decide to go in search of the baby's parents; his linen clothing suggests to Asterix that his parents are wealthy Romans, and they decide to visit the local camps to ask for information. As they leave the village, they run into a patrol led by prefect Crismus Cactus, who claims to be taking an Imperial census; after pointing out that the village is not part of the Roman Empire, the two Gauls beat up the prefect and his troops, and resume their quest. Overhearing their comments about a baby, the prefect decides to return to Condatum (now known as Rennes).

After beating up the garrisons at Compendium, Laudanum, and Totorum, Asterix and Obelix still have no answers, but the centurion at Aquarium tells them the prefect they ran into is not conducting a census, but looking for a baby. As they head back to the village, the two Gauls (with Dogmatix and the baby in tow) run into the prefect's patrol (now minus the prefect); a legionary named Odoriferus tries to snatch the baby while the others are distracted, but falls afoul of his superhuman strength.

Asterix and Obelix return to the village to give Vitalstatistix a status report, while the baby escapes their house and demolishes the doors of every house in the village except that of Getafix... as the magic potion has finally worn off. Asterix and Obelix have a brief falling out over Obelix's irresponsibility with the baby; Asterix proves his own irresponsibility by leaving the baby unattended until he makes up with Obelix, and the baby escapes and ends up drinking the contents of a half-full cauldron of magic potion left unattended in Getafix's hut.

Meanwhile, in Condatum, Cactus has found Marcus Junius Brutus waiting for him, and tells him the baby has been found; Brutus seems particularly anxious to get his hands on the baby without Caesar knowing, and tells Cactus (off panel) the secret of his parentage. He and Cactus return to Armorica and set up their own camp (rather than risk one of the local camps getting word back to Caesar), and then send Odoriferus into the village disguised as a pedlar of baby rattles to kidnap the baby. He succeeds only in getting thrown about by the still extremely strong baby, and flees back to the camp.

Brutus next tries sending an embarrassed and furious Cactus into the village in drag as a nursemaid, where he asks for Asterix (further stoking the rumours that Asterix is the baby's father, and this mysterious woman is the mother). "Her" falsetto singing voice seems to be the only thing that can stop the baby from crying, so "she" is hired immediately. Cactus tries to sneak away with the baby under cover of darkness, but the baby's crying (and his attempts to stop him by singing) scupper this plan. He tries again the next day, but the baby, still feeling the effects of the potion, beats him senseless, and he, too, flees back to Brutus' camp in terror.

His patience spent, Brutus decides to follow through on his vow to put all Gaul to fire and the sword if the baby is not recovered, and that night, he has flaming arrows fired into the village, setting it ablaze. Vitalstatistix directs Impedimenta to lead the women and children of the village (including the baby) down to the beach, while the men are given magic potion and launch a counterattack against the Romans. While they are thus engaged, Brutus confronts Impedimenta and demands the baby, who scampers toward him... and finds the magic potion has worn off. Brutus jumps into a rowboat and heads out to a ship waiting just offshore, crewed by Redbeard and his band of pirates (who ponder taking the baby for themselves and demanding a ransom).

The distraught Impedimenta tells Asterix and Obelix what happened to the baby, and as Redbeard's ship is still moored offshore, they swim out to it, causing the pirates to abandon ship. Asterix, Obelix, and Dogmatix give Brutus a much-deserved thumping and return to shore, just in time for the arrival of Julius Caesar himself, wondering what Brutus has been doing in Armorica. As he asks who the baby is who has caused all this fuss, a voice tells him the baby is his own son, Caesarion... a voice belonging to the baby's mother, Queen Cleopatra VII of Egypt! Sensing Brutus' malicious designs on the baby, she had Caesarion sent to the one place she knew he would be safe: the Gaulish village.

Caesar punishes Brutus by having him sent to Germania, and promises the Gauls that his engineers will re-build their village. The celebratory banquet takes place not in the village, but on Queen Cleopatra's barge, where Asterix finally gives Obelix an overdue lecture on the facts of life (which Obelix still doesn't take on board). The baby sleeps peacefully during the banquet, little knowing that he will one day rule Egypt alongside his mother as Ptolemy XV Philopator Philometor Caesar.note  Or that he will be executed at the age of seventeen on orders from Caesar's great-nephew Octavian...