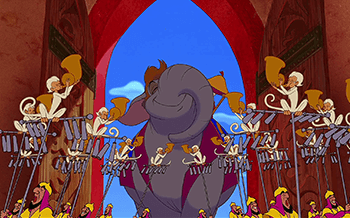 A Big Entrance is Exactly What It Says on the Tin. An entrance so over-the-top and so cool, ensuring that every character's eyes are on that entrance, that the entrance itself merits its own entry on the Moment of Awesome page.

The absolute most important things in the entrance are that the entrance itself has to be loud, it has to be overly dramatic, it has to catch the attention of all characters present, and it has to be cool. There are many other tropes that can help achieve this, including, but not limited to...

The diametric opposite of the "Stealth Hi" in a Stealth Hi/Bye.

May become an Establishing Character Moment. Contrast Jobber Entrance. Not to be confused with Big Door.

One Sub-Trope of this is Crash in Through the Ceiling, which is for when there's a loud entrance through a ceiling.