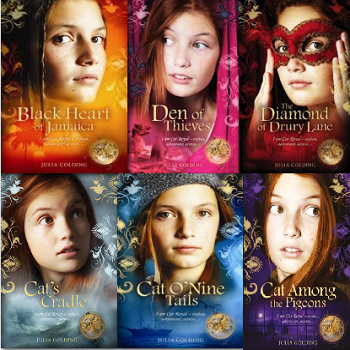 An ongoing series by Julia Golding, set in the late 1700s, follows the adventures of orphan Catherine "Cat" Royal. The books are told in the first person. The series so far:
Advertisement:

The Diamond of Drury Lane: Cat is introduced as the heroine. She lives and works at the Drury Lane theater, where she was abandoned as an infant and taken in by the owner, Mr Sheridan. Her main adversary is Billy "Boil" Shepherd, a gang leader, and her oldest friend is Syd Fletcher, who leads the opposing street gang against Billy. She makes friends with Pedro, an escaped slave now working at the theater as a musician and actor; Johnny or Lord Jonathan Fitzroy, also working at the theater and as the political cartoonist "Captain Sparkler", a runaway lord, and the love interest of Lady Elizabeth of Avon; and Lord Francis and Lady Elizabeth of Avon. The mystery of the book is: What is the Diamond of Drury Lane?

These books contain examples of the following tropes: