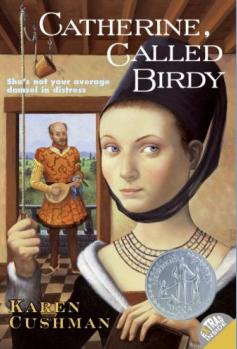 The eponymous Catherine is a headstrong teenage girl living in the Middle Ages. As the daughter of a lord, she is expected to lead the life of a proper young lady of the time. However, Catherine is reluctant to pursue embroidery and household chores, and finds herself rebelling against her parents' and society's expectations of her.

The book is narrated through Catherine's journal entries, spanning about a year. From the beginning, much of the conflict centers on Catherine's family's attempt to find her a suitable husband. This is easier said than done, as Catherine does not wish to marry anyone in particular and frequently goes to great length to drive her suitors away. However, this strategy backfires on her when the one man who is not repulsed by her behavior turns out to be a loud, coarse idiot. Now caught in a terrible engagement, Catherine does all she can to escape, eventually running away from her home to stay with her aunt. In the end, though, Catherine realizes that she is better off simply facing her fate bravely than running all of her life, and she returns home. Much to her pleased surprise, it turns out that her fiancé has died in her absence, and she is now set to marry his son—a young man who, though they know very little of each other, seems to be a pleasant and intelligent fellow.

While the main plot revolves around the marriage issue, Catherine's journal entries cover many other aspects of her life, and chronicle her personal development. Through the course of the book, Catherine reflects on religion, goes through various crises with her family and friends, and begins to develop a talent for painting.

Even though Catherine has not truly freed herself by the end of the book, she has learned to reconcile her own personality with her duties to her family and society, in a sharp contrast to the arrogant and impractical girl she was at the start of the story.

A beloved staple of middle school bookshelves everywhere, Catherine Called Birdy is a charming and entertaining story with a witty heroine and a unique look at daily life during the Middle Ages.

The novel was adapted to film in 2022 with Bella Ramsey as Birdy.