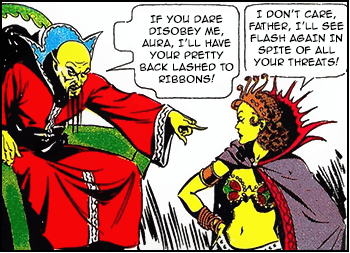 Jasmine: Please try to understand. I've never done a thing on my own. I've never had any real friends... [Rajah makes a surprised and offended growl] ...Except you, Rajah. I've never even been outside the palace walls.
Sultan: But, Jasmine, you're a princess.
Jasmine: ...Then maybe I don't want to be a princess any more!
Sultan: Ooh!!! [to Rajah] Allah forbid you shall have any daughters!
— Disney's Aladdin
Advertisement:

To the Rebellious Princess, being part of the royal family is overrated: You have no control over the path of your life, your responsibilities are numerous and burdensome (or not burdensome enough), you're generally under everyone's thumb, or you're destined to live unhappily in a political marriage. The only options are to throw off your frilly dress and to run off with the first hero who passes through (in old fashioned stories), or set off for adventures on her own on the sly (in the modern ones).

The Rebellious Princess is usually a teenager, typically brash (since it goes hand in hand with being rebellious). If she's not the hero, quite often she's the hero's love interest. This will sometimes invoke Marry for Love not only as another way for her to rebel, but to also get out of an Arranged Marriage. She usually qualifies as a Royal Who Actually Does Something. Sometimes the Rebellious Princess is the White Magician Girl, but not always: in video games she can also be an archer, warrior, or Black Magician Girl. Mage princesses are more likely to be found Kicking Ass in All Her Finery. She may also be a Politically Active Princess depending on the nature of her "rebellion".

When written badly, this trope evokes a spoiled brat who is simply whining about how bad their palatial life is when they have never seen how the "lower classes" live; their "rebellious nature" is not based in any actual ethics or logic. For this reason, people who write this trope must remember to give royal status suitable drawbacks that she wants to get away from.

Somewhat more common in the earlier days of the RPG genre than they are now; their population has dwindled with the reduced number of games involving monarchies. Male examples are rare but not unheard of.

Can be an example of Modest Royalty. Often experiencing Rich Boredom and likely to invoke a Caged Bird Metaphor. For characters a little lower on the social hierarchy, see Spirited Young Lady. Might be confused with a Princess in Rags who is forced into not being a princess where the rebellious one chooses not to be.