Literature / Kingdoms of Thorn and Bone 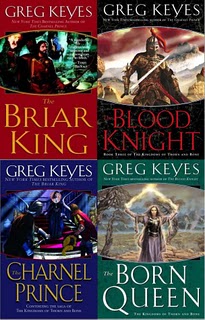 Two thousand years ago Virgenya Dare overthrew the Skasloi overlords that had enslaved humanity. Her descendants rule the kingdom of Crotheny, until a traitorous plot to overthrow them leads to tragedy. The legendary Briar King has awakened from his slumber, heralding death. All is not as it seems and Anne Dare must become the queen her country needs while monstrous assassins stalk her. Sir Neil MeqVren must learn that the politics of the court are as deadly as the battlefield as he tries to safeguard the queen. Aspar White must face murderous creatures of legend as he tries to unravel the mystery of the Briar King.