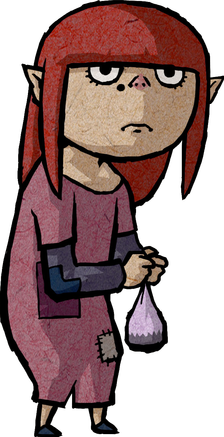 "These patches, what are we trying to say? Beggar? No!"
— The Genie, Aladdin
Advertisement:

What's one of the easiest ways to show that a character doesn't have much money? Have their clothing, often grey or especially brown in color (though not always), worn out to the point where patches, often rags, needed to be sewn-on. The patches are usually placed on the sections of clothing that face the most friction, such as the elbow area for shirts and knee area for pants. The patches are almost always square in shape, but they don't need to be, and they often don't match the color of the clothes. Some examples take this Up to Eleven and have the clothes entirely be covered in patched rags. You can mostly find characters such as hobos, orphaned children, Street Urchins, peasants, and literal examples of Rags to Royalty dressed like this.

Note that for this trope to apply, the character must be in poverty; if they're wearing patched-up clothes only because they like that style, that's Not an Example.