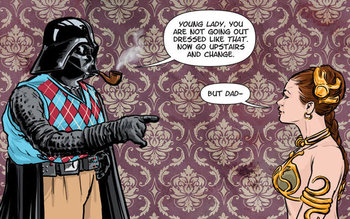 . Used with permission.
"Don't step out of this house if that's the clothes you're gonna wear!"
— "You Gotta Fight For Your Right (To Party)", The Beastie Boys
Advertisement:

No child of mine is Describing Parental Fashion Veto Here in a shirt like that!

A kid, often a Bratty Teenage Daughter, wants to go out with her friends, out on a date, or out to a party, but the way she's dressed does not please her guardians, usually an Overprotective Dad and/or an old-fashioned mom. This may be due to the outfit being overly sexy, or the parent may simply disapprove of the style. In The '90s and early 2000s, Bare Your Midriff was a common cause for this, the style being a visual shorthand for "rebellious teenage girl". This may also extend to makeup and hair.

What happens can vary. Often the kid will obey but in a huge huff. Other times a fight will break out, and might even cause enough bitter feelings to make the Conflict for the episode.

Sometimes the kid will try to outsmart the parent by smuggling the offending outfit out of the house, either hidden under clothes they know will meet with parental approval or carried in a bag. The kid then changes clothes once they are safely away from their parents' disapproving gaze. However, this is likely to end with the kid suffering a mishap which results in the parent finding out they wore the forbidden clothes.

Compare Age-Inappropriate Dress, I Want My Beloved to Be Fashionable, Underdressed for the Occasion. Contrast No Dress Code, which implies a distinct lack of parental fashion veto.