Pelts of the Barbarian 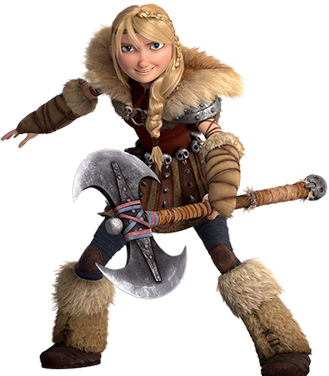 Astrid follows the dress code of the viking warriors.
"Oh please god let this episode be about Reb killing people with a battle axe while riding on a motorcycle, dressed in furs and wearing a huge horned helmet!"
— The Spoony Experiment reviewing the Miami Vice episode "Viking Bikers From Hell"

Barbarians, particularly those from the Grim Up North, typically wear garments made of rough furs, leathers, hides, and simple cloth. Thus such clothing can indicate the wearers are part of a primitive, but Proud Warrior Race (even if not everyone in that race is particularly tough).

What this means can vary. When such people are portrayed as savage and underdeveloped, such clothing stands in stark contrast to the "civilized" people, where even their peasants wear nicer materials.

Other times these clothes are just treated as part of the barbarian charm. Who has time to make fancy clothes when they often have to fight packs of wolves, and/or frost giants? There's no point in making the chief's robes out of velvet, embroidered symbols, and ermine edging. Just cut bearskins into cloak shapes and toss them over their shoulders as a Badass Cape.

The exact clothing worn will vary. Often these people are fully dressed, but just as often they mainly wear loin cloths and fur bikinis. They also tend to dress this way whether they are in their homeland or not (so this trope doesn't preclude Exposed to the Elements).

Two common Real Life groups depicted this way in media are Vikings and Mongols, although that often falls into Hollywood Costuming. You can often tell fantasy counterpart cultures of them if the people dress this way.

Can also overlap with Nemean Skinning.

Compare Pretty in Mink (wearing fur is for looking glamorous instead of looking tough and more often have the choice of more simple clothing unlike a lot of examples on this page), An Ice Suit, Beard of Barbarism (ways of styling a beard to show one is tough) and Horns of Barbarism.

See also Barbarian Hero (characters who tend to dress like this), Frazetta Man (primitive people who wear very little hide clothing), Post-Apunkalyptic Armor (various materials crudely made into clothes), Nubile Savage, and The Strongman (who might wear it in his act).

A subtrope of Stock Costume Traits.