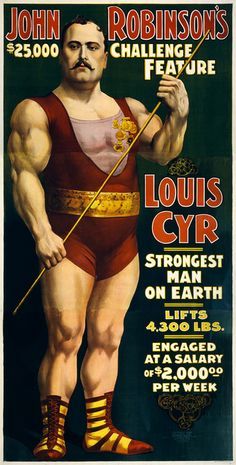 It was the 19th century. Muscle-queens didn't exist yet.
"Now our next performance, oh he's sharp as a tack, strong as an ox and a big hit not just with the ladies in our audience I hear, huh? So, putting the scandal in Scandinavia, since time in-memorial, let's give a big hand for my boy: Donar the Great!"
— Al Grimnir/Mr. Wednesday, American Gods (2017), "Donar the Great"
Advertisement:

The Strongman (alternatively known as the muscleman carnie) is a term used to describe people who would perform feats of impressive strength and skill to entertain the less impressive masses, performing bent presses (since bench presses did not exist when the concept became a thing), they would support a large amount of weight held overhead, they would break chains, bend steel and a host of other fantastic examples of Super Strength.

In the late 20th century, the title of "strongmen" became associated with the sport of weight lifting, displaying raw strength through the lifting and pushing of heavy objects like rocks, refrigerators, even trains and massive vehicles, all in competition with other strongmen.

There is no set uniform for the Strongman, but the most common image people attribute to him is a handlebar mustache and Pelts of the Barbarian made from the hide of a jungle cat, implying that they are wild, self-sufficient men who had hunted and skinned that dangerous animal themselves.

Not to be confused with The Big Guy, who is the strongman of their Five-Man Band or similar team (even though they can overlap), and World's Strongest Man, who Strongmen are often advertised as.