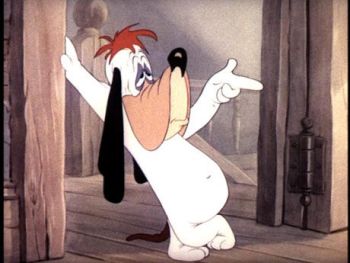 Hello, all you happy people!
Advertisement:

Droopy is a cartoon character created by Tex Avery during his years with MGM (1942-1954). This low-key basset hound was his most popular recurring MGM character, and remains an icon of The Golden Age of Animation.

Droopy is a pathetically tiny, very melancholic, slow-moving dog. His Deadpan Snarker comments often form a sharp contrast to the zaniness of other characters around him and makes them appear even wilder. The plot of his cartoons are very similar. He is usually given some kind of mission that he needs to accomplish and allows him to be pitted against one of his two main antagonists: Wolfie the Wolf or Spike the bulldog. At first the odds seem against him, because he's such a tiny and slow dog. Yet Droopy is intelligent and always master of the situation. If his Berserk Button is touched he can even showcase enormous strength and beat up those who underestimate him.

The Droopy cartoons ran through 1958 with Michael Lah at the helm, but the Avery cartoons are usually regarded as superior. The character was retired when the entire MGM animation department was shut down for good at the end of 1957 as The Dark Age of Animation was beginning.

The character has appeared in other works since the end of The Golden Age of Animation, with a renewed series by Filmation in the early 1980's, a cameo in Who Framed Roger Rabbit (and each of the subsequent Roger Rabbit Shorts), and appearances in several Tom and Jerry spinoffs such as Tom & Jerry Kids (which in turn spawned a Droopy-centric spinoff, Droopy, Master Detective) and Tom and Jerry Tales.

The character is not to be confused with Snoopy from Peanuts.