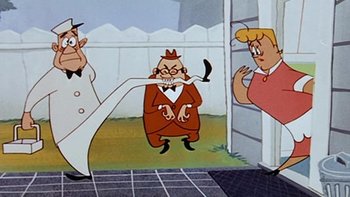 Sam and Maggie are a middle-aged married couple; he has a dog named Rover while she has a fancy poodle named Fifi. Maggie sends Sam out one day with a grocery list, Rover coming along. Sam carelessly walks into the street and both he and Rover are run over by a car. An ambulance arrives, but the cross-eyed bumbling medic winds up giving dog plasma to Sam and human plasma to Rover. The donations save their lives but Sam starts periodically acting like a dog while Rover starts acting like a human, only for both of them to revert back to their original behaviors until the next episode. Madcap antics ensue.