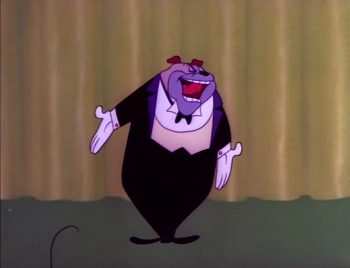 For the record, the piece is "Largo al factotum."
Magical Maestro is a 1952 animated short, directed by Tex Avery. The plot of the cartoon is fairly simple. A magician tries to get a job in a theatre, but is kicked out by the opera singer of the house because the theatre is playing a concert, not a magic show. In an act of revenge the magician disguises himself as the conductor and changes the opera singer into all kinds of wacky characters by using his magic wand as a baton. Finally the magician's wig comes loose and the opera singer recognizes him. He runs off without his magic wand, but the singer brings him back and acts out a similar act of revenge on him.
Advertisement:

Magical Maestro is one of Avery's most famous and popular cartoons. It is inducted in the National Film Registry since 1993, the only Avery short so far to be inducted there.